He's home. Such an enormous relief. This exhaustion I feel must be from anxiety. I wish we could look into the future and see us after we've adjusted and all these changes had become normal. When he got to the hospital his blood sugar was at 900. Strangely, he was still walking and coherent.

He has already gotten to the point where he doesn't mind giving himself injections.
Posted by tpals at 5:44 PM No comments:

Everything changes. Yesterday was nothing special and today our lives were picked up, turned over, and pummeled into a new shape. My son, strong and active, went to see the doctor and was sent straight to hospital with blood sugar levels of 900. He was crying when he called to tell me he is diabetic. How could he not be overwhelmed when he knows his father died from complications that came from diabetes? By the time I reached the hospital he had calmed down and begun accepting it. I'm still not there yet. Tomorrow the education begins into insulin and nutrition.

An afternoon that lasted a lifetime.
Posted by tpals at 8:44 PM 3 comments:

It's 39 degrees this morning yet it's supposed to reach 80 today. The nice rain we had will give everything a boost growing now that the sun will come out with some force.

I have done something incredible tonight...I actually went downstairs deliberately to exercise. I haven't done any formal working out for months so I'm starting slow; 20 minutes on the bike and 15 on basic strength training. It's a good idea frugally because my clothes are starting to wear out so I can either buy new or lose some weight and fit into what I already own.

I also sat down and ran some numbers for my budget. As long as nothing drastic happens in the next two months I'll be able to cash-flow the new roof without disrupting my emergency fund. In August I can get back to snowballing debt. Hooray!
Posted by tpals at 11:37 PM No comments:

Spinach and lettuce, oh my 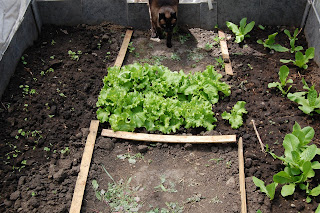 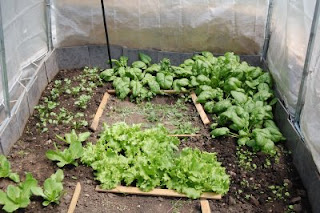 The parsley and corriander are very slow, but finally showing promise. Green ice lettuce and spinach are doing fantastic!. Romaine is a bit spotty. I should reseed some of those.
In the main garden, I have no idea if any parsnips are sprouting at all. Since I've read that the seed doesn't last from year to year, I went ahead and put the rest of my seeds into loo roll tubes and will see if anything comes up that way.

As it is the season of blockbuster summer movies and we can get in at half price if we go to the first showing of the day, this post is a quick look at what we've seen so far.

Terminator Salvation: Very good for those who enjoy lots of dark action and pessimistic future predictions. My son pointed out that the introduction of the Marcus character was oddly abrupt but otherwise he was the focal point of the whole thing. I'd guess we'll be seeing much more of Sam Worthington now.

X-Men Origins: Wolverine: Hugh Jackman, of course, enough said there. After the movie I remembered where I'd seen him and Liev Schreiber before...in a romantic comedy!

Star Trek: Very well done. Coming from a life-long treker, that is praise indeed. Leonard Nimoy has always been my favorite, so a special treat to see him take an active role in the movie. It was good that for many of the characters they chose by acting ability instead of just look-alikes. Only two didn't really measure up to the originals: Winona Ryder as Spock's mother didn't work and Anton Yelchin as Chekov just wasn't right. Of course, since Chekov was a new ensign in the second season of the original show, he shouldn't have been in this movie at all. Sylar as young Spock - brilliant.
Posted by tpals at 5:48 PM No comments:

There will be no pictures of this. Gray hair. I actually did a double take in the bathroom at work and went back to the mirror to look more closely. Oh the joys of growing old!
Posted by tpals at 3:00 PM No comments: 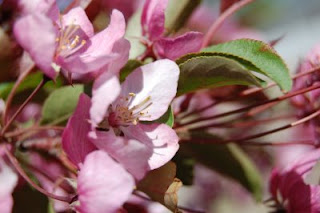 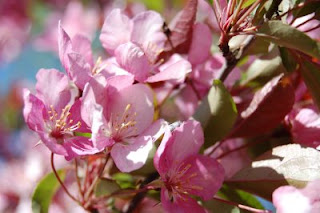 The bees are loving this flowering crab tree. Or they would be if the wind wasn't blowing them out of the air right now!

There's nothing quite like settling in for a nice snack of green pepper and cilantro after the trauma of having a cage cleanout. 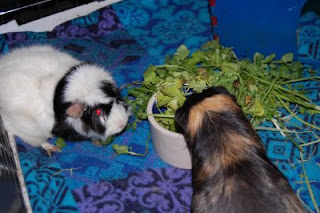 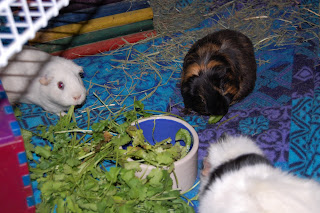 There are others who don't let anything bother them... 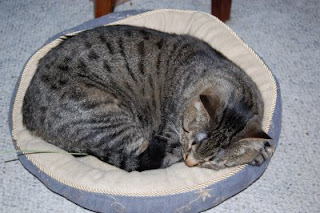 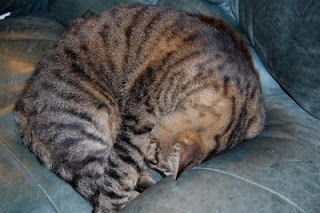 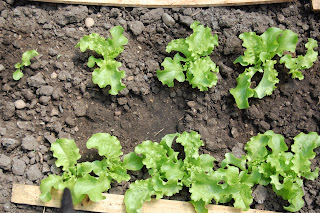 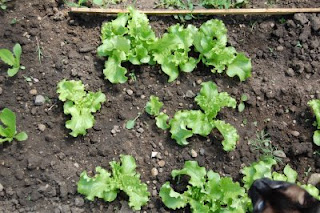 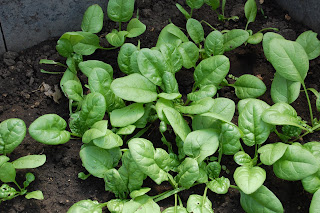 The green leaf lettuces and spinach are doing well inside the polytunnel. The outside seeds are slower, but we had a nice rain last night so they should be poping up soon. 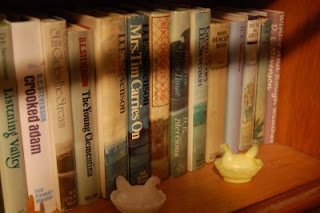 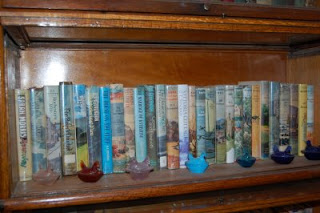 I've been re-reading some of my old favorite books by D.E. Stevenson. These are comfort books return to joyfully every few years. When I was young, my mom and I depended on the local library for the few copies they carried. Every time we were near a used book store there was no question of passing by without checking for her novels. Very rarely we would find one. And then...came Ebay. I now have a lovely set that I can visit and enjoy at my leisure.
If anyone has a copy of Miss Buncle's Book with the original dust jacket I'd be grateful for a picture of it. It's the only one I haven't been able to locate so I can make a new cover for my copy.
Posted by tpals at 10:49 PM No comments:

Last night I heard an odd tinkling noise; figuring the cats were up to something I wandered thru the house and found the kitchen light fixture at shoulder height. These older houses can be a challenge to keep up with and it feels like I've spent most of the day going up and down the ladder. The hardest part for me was holding the weight of the light up to the ceiling while I reattached it. I'm not a strong person! 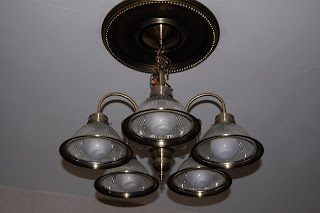 It's back where it belongs again. Notice the cleverly disguised CFL lights. I've become a fiend for saving electricity. Since I can't afford the solar panels and wind turbine I'd like, I've put my efforts into cutting back usage with excellent results. We now use HALF what we did before!
Now if only we could cut what we eat in half too....
Posted by tpals at 5:58 PM No comments: 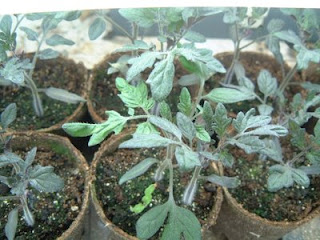 The seedlings are stuck inside while we all wait for the weather to stabilize.

In other news: my contractor stopped by today to give me a quote on the roof. Ouch. I seriously underestimated the cost of that. We scheduled it for July to give me time to get the funds together. It's annoying because I'll have to reduce my debt payoff down to minimums for the next three months to pay for this and restock my emergency fund. This pushes my debt-free goal out further. Blast!
Posted by tpals at 10:28 PM No comments:

It's hard not to get ahead of the season when the weather has been so warm lately. Tonight's low is forecasted to be 35F though and that's a good reminder that we could still dip below freezing.

The hostas have started coming up now so instead of getting carried away planting warm weather plants I think I'll do some weeding.
Posted by tpals at 6:06 AM No comments:

Since I follow a number of blogs that deal with being green, simplifying, frugal living and gardening I tend to come across an abundance that deal with the satisfaction of being a 'homemaker'. Something about those posts invariably produces a sneer on my face and the desire to read something blatantly sci-fi and action...Honor Harrington, anyone?

It's ironic because I am the homemaker; I have to be. I've been widowed for over 16 years. Who else was going to cook, clean, mother, work, shop, fix, mow...? Something inside of me rears up and roars at the idea of being anything remotely like a fifties housewife caring for her home though. I do not own an apron. Thank goodness.

I may be alone in my reaction because those posts seem to get a lot of agreeing comments. That's ok. I have the entire set of Honor books.
Posted by tpals at 5:43 PM 3 comments:

I do love trees. Not quite as much as my dad who seems to border on obsessed...but still. 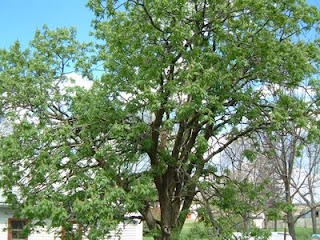 This is the horse chestnut right outside my back door. It's always the first to leaf out in the spring (and the squirrels love it). 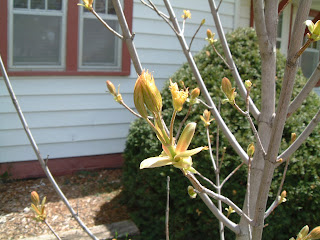 This beauty is a Variegated Norway Maple that I planted in my front yard a couple years ago. I'll try to remember to post pics when the leaves are fully out. 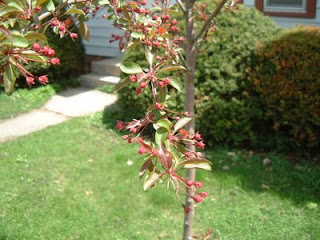 My other front yard planting: a Red Splendor Crab. It's just beginning to flower.

It's good that I kept the tags or I'd never remember the names!

Growth in the food section

Some of the fun things happening at my place now: 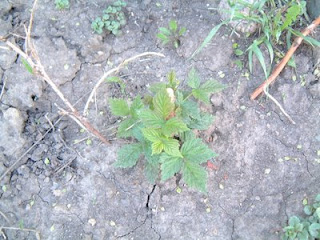 Raspberries transplanted from the farm are leafing out. 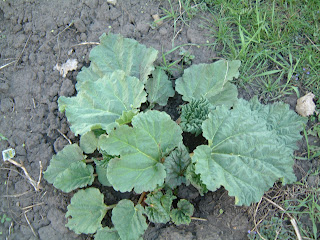 The rhubarb I split from my parent's hill is growing well. 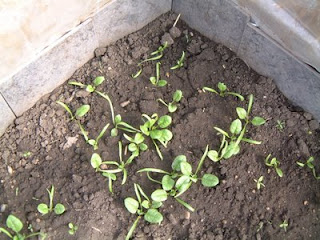 Spinach in the polytunnel was the first to come up.

Another beautiful day for puttering around in the garden. I need to sketch out what's planted where before I forget entirely. Onions, parsnips, peas and carrots today. Sounds very healthy, doesn't it? Now, when will the rain come? I'll put in my request for a nice, gentle soaking rain followed by sunshine please.

My son was reading the blog and pointed out that I didn't mention who did the tilling in the garden. Yes, it was all done by my fine, strong son. (payment for gas money)

Now, do I have energy enough to actually cook the spaghetti I was planning?
Posted by tpals at 5:24 PM No comments:

I love this time of year. Perfect temperature for working outside, no mosquitoes...no snow!

I finished planting the old garden with turnips and rutabagas. Tomorrow will be onions, carrots and parsnips. The rest will have to wait until the frost danger is past. This is an experimental year; I don't think I've ever eaten a parsnip.

There's a pasture bordering my yard. I wish it were mine. Land lust.
Posted by tpals at 7:51 PM 1 comment:

Finally a nice weekend when I'm home. I'm going back out to do more planting in a minute. Tilled in some lovely rich compost in the old garden patch and planted potatoes, beets and cabbages.

The honeycrisp apple trees are unfurling leaves and the raspberries are putting out shoots.
Posted by tpals at 4:27 PM No comments:
Newer Posts Older Posts Home
Subscribe to: Posts (Atom)