A friend recently told me how much they pay for petrol; after doing the conversion from liters to gallons and the exchange rate...$7 per gallon!!!!

We really are sheltered here in the US from the realities of truly expensive gas. When I think of the vast distances that have to be covered by our trucks it makes me shudder. From my house to the nearest store/gas station is eight miles; work is about 45 miles away. Imagine how difficult it would (will?) be if we bore the burden of that $7 gas bill.

I'm feeling anxious just thinking about it.
Posted by tpals at 6:51 AM 1 comment:

I've watched the latest Doctor Who three times now. It has the weeping angels that were in my all-time favorite episode Blink. This is incredibly dense (is that the word I want?); the catacombs make the perfect backdrop to the storyline, I see more details each time. The supporting cast totally eclipses the doctor; Dr. Song fascinates, Amy Pond is just as good as she was in the first episode, and the Bishop - Father Octavian - brilliant.

Best rebuttal of the old 'no offense' line: Quite a lot taken, if that's alright, Doctor.

The show has redeemed itself from last week's Dalek flop. (Though I'm still not convinced that Matt Smith has enough depth to carry off the Doctor for very long.)
Posted by tpals at 10:33 AM No comments:

Mondays can really suck the life force right out of you. I came home from work and took a nap. Of course, now when I should be sleeping I'm awake. Next logical step? Get a head start on tomorrow's work so I can sleep in! :)

There is a certain madness to my choices.

One of the guys at work has a daughter graduating next month. To prepare he is finishing his garage: drywall, paint and new shelving. Me? I'm just cleaning my house!

In a brief spell between showers I peeked at the garden; the onion sets are up and going strong and I saw one little bunch of potato leaves emerging. The challenge will be staying on top of the weeds that will also greet the rain with a growth spurt.
Posted by tpals at 11:22 PM 1 comment:

I have all these great ideas for posts while driving home, but when I'm sitting here they all flit out of my head and I'm left saying ummm. So this will be my random blathering for the week.

We finally got rain, lots of rain. The rain barrels are full and everything in the garden should have got a good wake-up. I'm glad nothing was up before because yesterday the rain got confused and fell as pea-sized hail.

I bought a cell-phone booster on Amazon last week and it works! The first time I could have a conversation inside my house. I still need to route the cable down through the basement.

I almost forgot that I had got some heavy cream when it was on sale but found it hiding in the fridge so I made butter this morning. It's very cool out compared to recent weather and I'm in the mood to have the oven on; that makes it a good day to cook for the week ahead. I've been slacking off on taking lunch to work.

I had hoped to take next week off and concentrate on home stuff, but work isn't cooperating. If only we had won the lottery!
Posted by tpals at 10:05 AM 1 comment:

To fly or not to fly

While it's not an issue for me because I'm not going anywhere, the situation in Europe does raise some interesting questions.

'The head of the airline industry body, Giovanni Bisignani, told the BBC: "This is a European embarrassment and it's a European mess." '

Personally, I don't see why it's an embarrassment. The volcano wasn't the result of negligence. Nobody could have headed off the ash cloud before it crossed flight paths. It could be considered embarrassing how dependent they've become on air traffic, but given the source of the quote I seriously doubt that's what he meant.

I've been in airports before where the flights were delayed or cancelled because of mechanical problems (cough cough Chicago O'Hare). While there was a lot of pissing and moaning, nobody stood up and said "Hey! I say let's go for it with the wonky engine or wing flaps. What's a little risk?" The downed flights are definitely inconvenient and stressful, but won't most people prefer that to putting themselves and their families in danger?

It would be a no-brainer decision for me.
Posted by tpals at 8:47 AM 1 comment:

This is probably what I get for encouraging my parents to do more (but if they don't keep going/doing they will stagnate and decline!); they've bought a 10 x 12 shed...and I get to help assemble it. They need a secure building to start a new batch of chicks. Currently, they'd be at the mercy of foxes, rats, raccoons and cats. In other words, there wouldn't be any new chickens. When I first looked at the instructions my initial reaction was to ask if they could hire someone to build it - complicated! We went out and sorted out the parts and began assembling the frame. This is going to take a few sessions to finish.

I've also been puttering around with my own stuff today. Just finished re-potting some tomato seedlings which I'll move out onto the shelf greenhouse inside the polytunnel tomorrow.

My son is at his second prom tonight which means I get to return the tux tomorrow. Driving to Sioux Falls on a Sunday isn't my idea of fun but I can get some other errands out of the way.
Posted by tpals at 8:56 PM 2 comments:

I did manage a few items on the ever-expanding list of need to do items; the compost got turned, the fish tank thoroughly cleaned, the last of the potatoes and golden beets planted, and the guinea pig cages cleaned and moved into the library. This has freed up the dining table for next month's graduation party. Very quiet in here now though without my friends talking.

It would have been a lovely evening for planting seeds without the wind. I could imagine my seeds spread all over the yard and very few ending up in the garden, so it must wait for another day.

The farm reports that Emerson is settling in and has eased up on his over-zealous seductions.
Posted by tpals at 11:04 PM 1 comment:

But first, here is one of my lovely hens. Still at the farm because I don't have a coop yet, but doing very well (although rather annoyed that there isn't a rooster and she would like to be a mum). 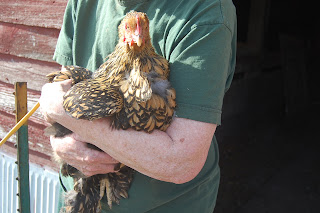 This elegant lady is Agatha. She and her sister Amelia have been feeling very broody lately. Sadly, Pretty Boy's death last fall has left them feeling cranky and upset. 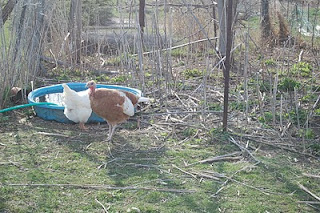 I came to the rescue! A verrrry long drive found me at a farm with a spare tom in his prime. A bit confused at first because he had never met a lady turkey before, it only took minutes after being let out of the traveling box for Emerson to discover his true purpose. His first post-coital strut: 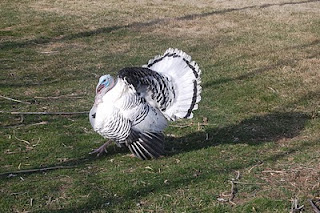 Although the hens are Bourbon Reds and Emerson is a Royal Palm they all seem quite happy with the new arrangement.
Posted by tpals at 9:23 PM 1 comment:

Thank you, FAFSA. And other thoughts

When I first did the financial aid calculator I thought we would only qualify for unsubsidized loans. There was no point in taking out loans at a higher interest rate than what I'm paying off on my credit card. Yesterday I got the aid award letter and almost a third of the college costs are covered by subsidized loans. That means no interest at all until after graduation, by which time I'll have all my other debt paid for and can take care of these easily.

It's frustrating not feeling well when the weather is perfect for getting garden work done. Yesterday was wasted on sleep. With luck today will work out better and I can make some progress.

I was planning on taking up beekeeping this year, had ordered a hive and located a source for bees, but it's not working out. The hive was back-ordered to not even ship before the pick-up date on the bees. What I've decided to do instead is order an unassembled hive later in the summer when it's not so busy, take the time to study up on beekeeping thoroughly, and order the bees early next year.
Posted by tpals at 7:25 AM 1 comment:

I just finished watching the first episode of the new Doctor Who. He's actually not bad. Sadly, not as good looking as David Tennant, but I think he'll do ok.

Best of all, the writing for the show continues to be exceptional!
Posted by tpals at 9:13 PM No comments:

I planted a row of potatoes today. Left over Yukon Golds that I grew last year. They're sprouting nicely, so hopefully I'll get another good result.

Clouds are moving in fast; maybe the weatherman has got it right for a change.
Posted by tpals at 6:18 PM 1 comment:

My mom found a few garlic bulbs she missed last year during harvest and gave two to me. A very powerful smell! I tweaked apart the cloves and planted them next to my original garlic row. 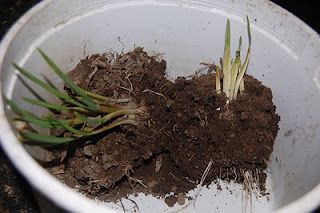 One compost bin had matured beautifully and provided two wheelbarrows full of goodness for the garden. I love when things work the way they are supposed to, but wish there had been much more of it. 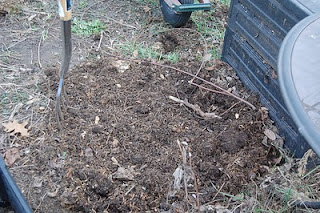 So, the garden is ready for planting. I would have put in my potatoes today if the order had arrived. The weather has turned from warm and sunny to a chill strong wind and a weekend of rain forecast. I'm thrilled to have the garden prepped, but am not so happy with the massive headache from the wind. It is going to get cold tonight; not quite freezing though.

Preparations have also begun for my son's graduation. My brother and his partner are coming, which is an honor. If I remember correctly he hasn't been here for 17 years - so cool that he's coming now! I completely forgot about ordering the cap and gown, but one of the benefits from a small school is they watch out for the students; it was already taken care of before I realized there was a problem.
Posted by tpals at 6:03 PM 1 comment:
Newer Posts Older Posts Home
Subscribe to: Posts (Atom)