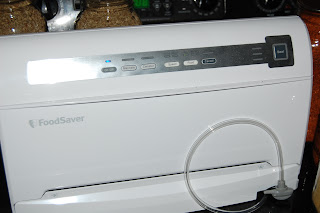 As I recently made some bulk spice/herb purchases, I decided to repackage them in jars to store in a dark pantry and hopefully extend the shelf life. Out came the handy vacuum Foodsaver. 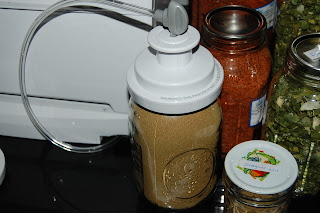 The jar sealer is placed over the lid (I have both regular and wide sealers) and the vacuum tube attached. A quick press of the 'Canister' button, some humming noises and flashing lights, then... 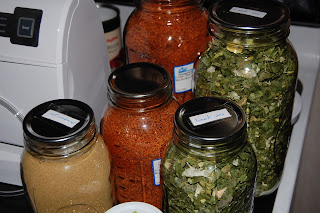 sealed jars! Powders are tricky as the sealer tries to suck the powder up and this needs to be avoided to save the Foodsaver from clogging. I used a bit of waxed paper to cover most of the powder before sealing.
Posted by tpals at 3:01 PM 1 comment:

I've been working with a company to figure out what it would take in solar panels and batteries to run the essentials in an emergency. Because I'm in a heavily treed town there isn't anyplace which would get full sun all day so they've estimated it would take 24 panels to completely power my home. Obviously, I can't afford that many and it would a bit silly to have that large an array in town.

What I've been working out is what I want to be able to run all the time. I've come up with the refrigerator, freezer and furnace. I can live without hot water and have alternatives for cooking. A couple fans would be nice but not necessary; likewise the computers. 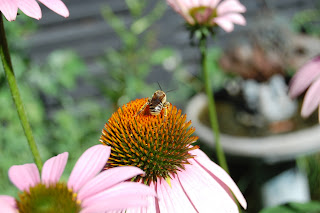 There must have been something special in the air today because the the bees were very busy on the purple coneflowers. I couldn't count them but there were more than I've seen at one time for years. Definitely something to smile about as I've hardly seen any before today this year. 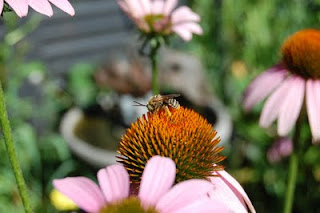 My mom spotted this deal at Lewis Drug store. If you have one in your area check out the camping aisle for 2 packs of Sterno canned cooking gel at half price. 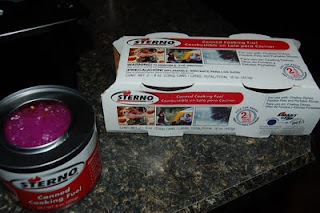 The little stove I found on Amazon; it's a Coghlan's. 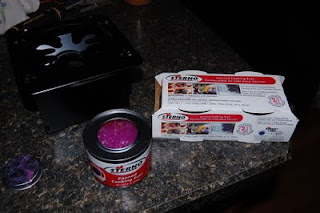 I can't see it in the photo, but the can is lit and burning with a blue flame here. 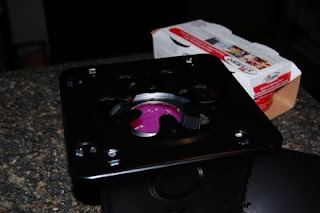 This is an excellent option for emergency cooking if you're like me and have an electric stove. I have outdoor options with the grill and my rocket stove (which I'm planning a post on this weekend) but sometimes cooking outside isn't a good choice. The weather could be bad or mosquitoes might be swarming. I also have a propane camping stove, but that isn't recommended for indoors.

If you don't have a Lewis in your area, try to check your local stores just in case. I've found that different stores will often have the same items for sale.
Posted by tpals at 10:25 PM 1 comment:

How do they do it?

I'm referring to those amazing gardens and allotments that are flourishing and weed-free. To be honest, I am struggling yet again attempting to keep up with the weeds and since the potato flattening there isn't any part of my garden that is thriving this year.

This morning I weeded out the polytunnel and confirmed that the romaine and parsley never came up. I had to dust the broccoli because the white hairy caterpillars were shredding them. It's a shame I don't have hens here because those would have made a nice treat!

It's day four of our awful heat wave. Hot and humid - I just hope the power stays on.
Posted by tpals at 10:44 AM 2 comments:

When I was bringing in the laundry off the line today I saw a dragonfly with black wings and a white tail on my compost bin. I got the camera but every time I tried to get close enough to shoot it flew off.

This smaller specimen was not quite so camera shy. 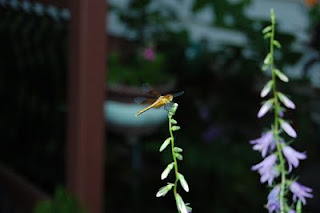 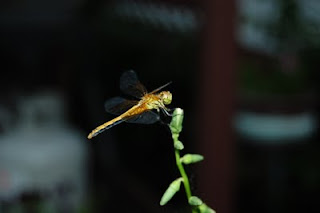 Two weeks ago we had a massive storm blow (literally) through town; trees were down or uprooted, metal pole barns were shredded, all the streets were blocked with branches and power was out for six hours. We were very lucky - hundreds of branches and sticks to be cleaned up but we didn't lose any trees. My camera battery was depleted at the time or I could have shown the truly massive limb that fell right next to the polytunnel, or the large branch that flattened my potato patch.

Shown here are two limbs that formed the top third of one of our trees. They had broken in the storm but were still hanging in the tree until another storm last night shook them loose. We received 1.5 inches of rain while my parent's farm four miles away got 2.25 inches. 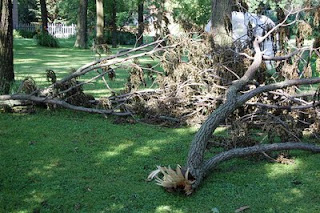 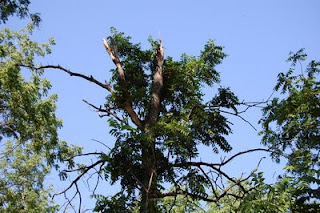 The days have been brutally hot with high humidity so I'm far, far behind on weeding.

My neighbor came over yesterday and tightened up my clotheslines. I think, like me, he suspected his kids had been hanging on them. Now, back up to the original height of over six feet, they are safely out of reach.

The wet weather has been a bonus for the toad population. My lawn mowing was a slow affair since I kept pausing to let the babies hop out of the way. :) While clearing a pile of sticks today I disturbed the patriarch (or matriarch?) of the local population. It covered the palm of my hand (and promptly peed on me) before I shifted it into the flowers and safety.

Another weekend has flown by and it's back to work tomorrow.
Posted by tpals at 6:19 PM 2 comments:
Newer Posts Older Posts Home
Subscribe to: Posts (Atom)