This makes me glad I'm not a business owner...

I was searching for greenhouse information and stumbled across the state's list of tax delinquent businesses. The interest charged is enormous! Imagine not paying $11,000 in taxes then to get the bill for $68,000. The highest listed was $93,000 in taxes resulting in a bill of $353,000. I won't even go into how many years of gross salary that would be for me.

I did my visit to the county courthouse today and paid the property taxes for 2015 and picked up the vehicle tags. I like getting the taxes over with early in the year and I had to get the tags in January anyway. That's it for annual fees until April when home owner's insurance is due.

Other news: I'm still arguing with the insurance company over the value of my car. I was told if not happy I could get statements from three dealerships for how much they would have sold it pre-accident. So I did that this week also. The first one I talked to was CarsForLes (that's how it's spelled) in Madison SD. I'm being specific because you do NOT want to go there. They were incredibly rude, mocked my car, and refused to help. I then went to Lake Herman Auto and Prostrollo's and both were friendly and had no issue with giving me a written statement. Luckily I've kept in contact with my car salesman from ten years ago and he gave me the third statement needed.

Honestly, the insurance company has not been easy to work with. They required a copy of my car title to prove I'm actually the owner. This was after numerous phone conversations where it was freaking obvious I own it and love it. Sheesh!

Thank goodness it's the weekend. :)
Posted by tpals at 8:40 PM No comments:

I could get used to this weather. :)

It takes so little wood to heat when the sun kicks it up to over freezing. Only carrying in one bag instead of three!

The chickens are having a great time. Each tree has a space of mud around the trunk which they had to visit today. Then when I came out it was the mad dash to see what I brought...except they didn't want to walk through the snow. The pen was full of fat hens flapping frantically to fly back to the coop.

My son came home from work Thursday with a high fever, sore throat and cough. Hello, influenza. That night I started throwing up. What are the odds we both get sick with completely different ailments? Happily, he has a strong immune system and is down to a nagging cough now. I'm feeling better too.

My wall of wood in the porch certainly came in handy yesterday. I was too weak to haul any in from the shed, but sickness and bad weather are the reasons I stacked it there, so Yay.

Such a lot of bother and waste all because someone didn't take the time to familiarize himself with the vehicle he was driving that day.

I get a rental car while mine is being repaired but can't get it until Monday because I don't live in the city. I pleaded with the body shop to find a way to fix the car instead of totaling it. Because I won't go into debt, a replacement would be limited by the value set by the insurance company and whatever I could add from my savings account...not likely to be something as comfortable as my 12 year old Audi! When asked if I minded used parts I assured them that I PREFERRED used parts (reuse and recycle!).

So, it looks like I get to keep my darling old car. Yay!

The weather has been so cold that all the local schools cancelled classes today. I was tempted not to take the garbage out this morning, but figured since I had to go out and do chores anyway...

I did put up a heating lamp in the coop. When the eggs are freezing, the chickens need the extra heat source. Something is keeping them going. Sixteen eggs today.
Posted by tpals at 9:41 PM 2 comments:

And Monday starts off in a bad way. 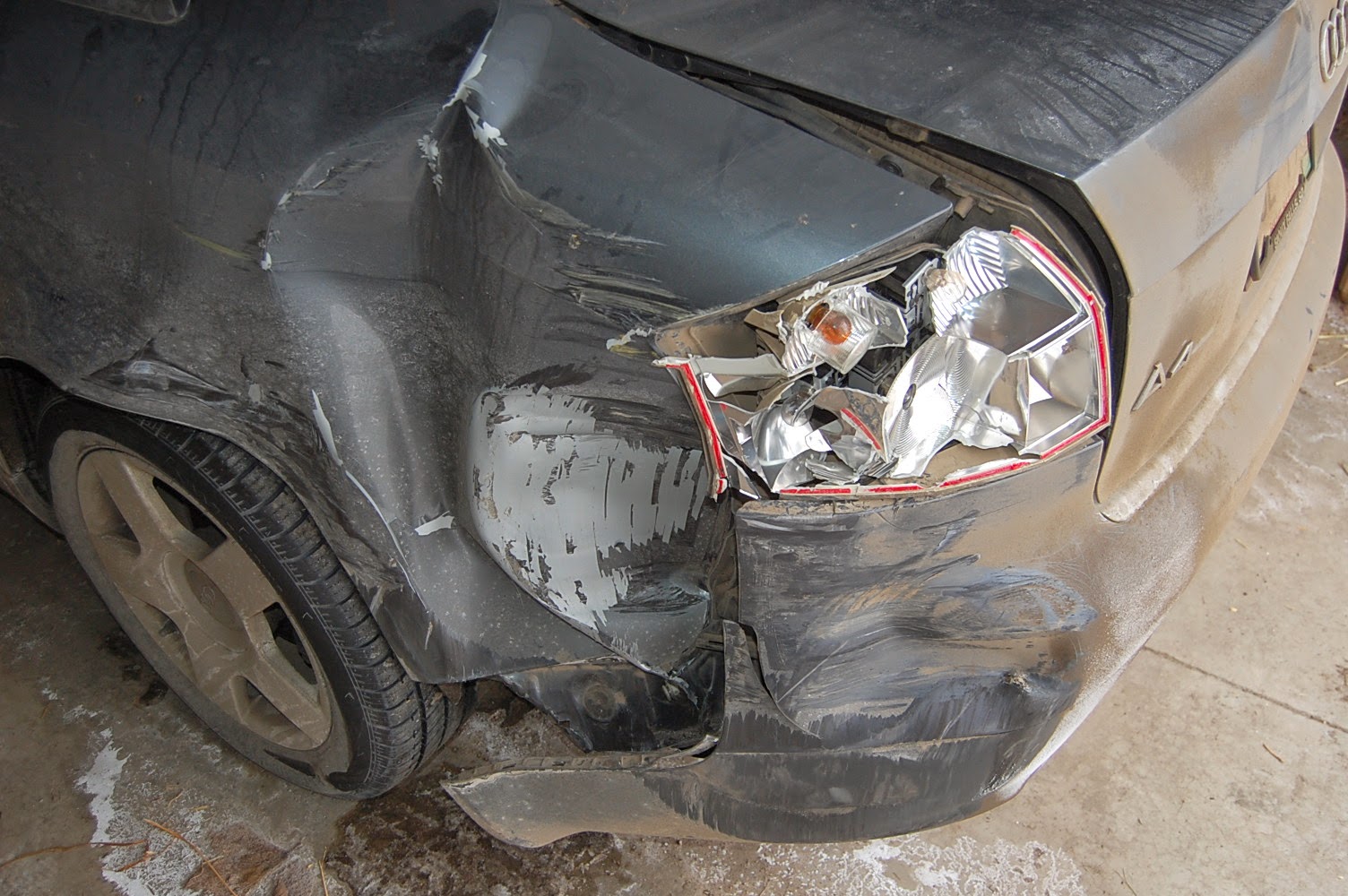 This is what happens when a school bus driver can't find his brake pedal.
Posted by tpals at 8:33 PM 4 comments:

What a difference in perception the temp measurements can make! I think in Fahrenheit so even knowing something is shown in Celsius the minuses can give me the shivers.

Feeling the wind tonight...but not snowing!

I took some inside the coop pictures today. Mycroft looks a bit funny because the camera caught him just as he finished crowing. They certainly have earned their treats: 14 eggs today. The nesting boxes are very popular which is why I plan to buy a couple more next week. Two hens at a time in each don't really fit well, but that doesn't stop them from doing it when they get the urge. 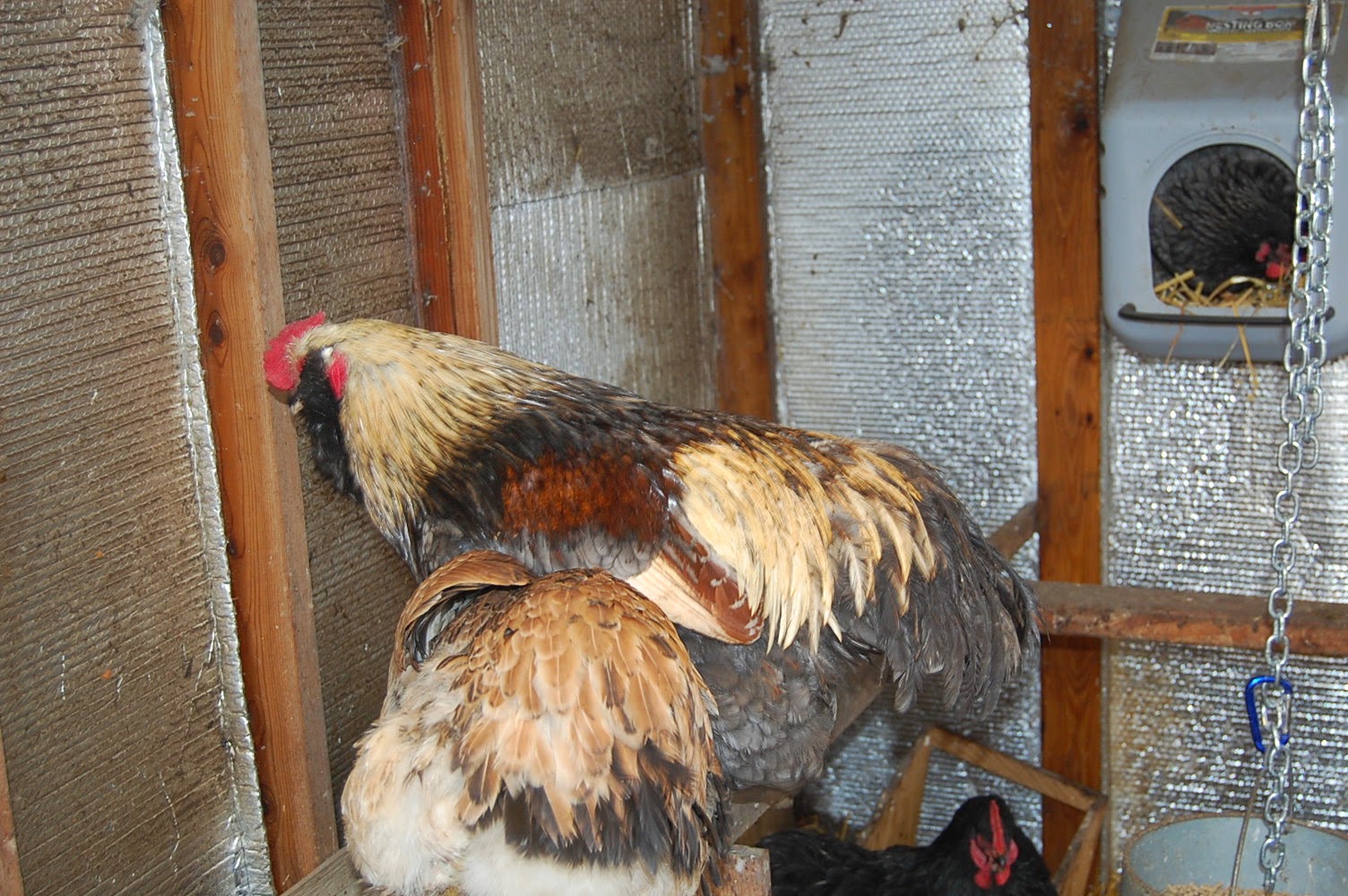 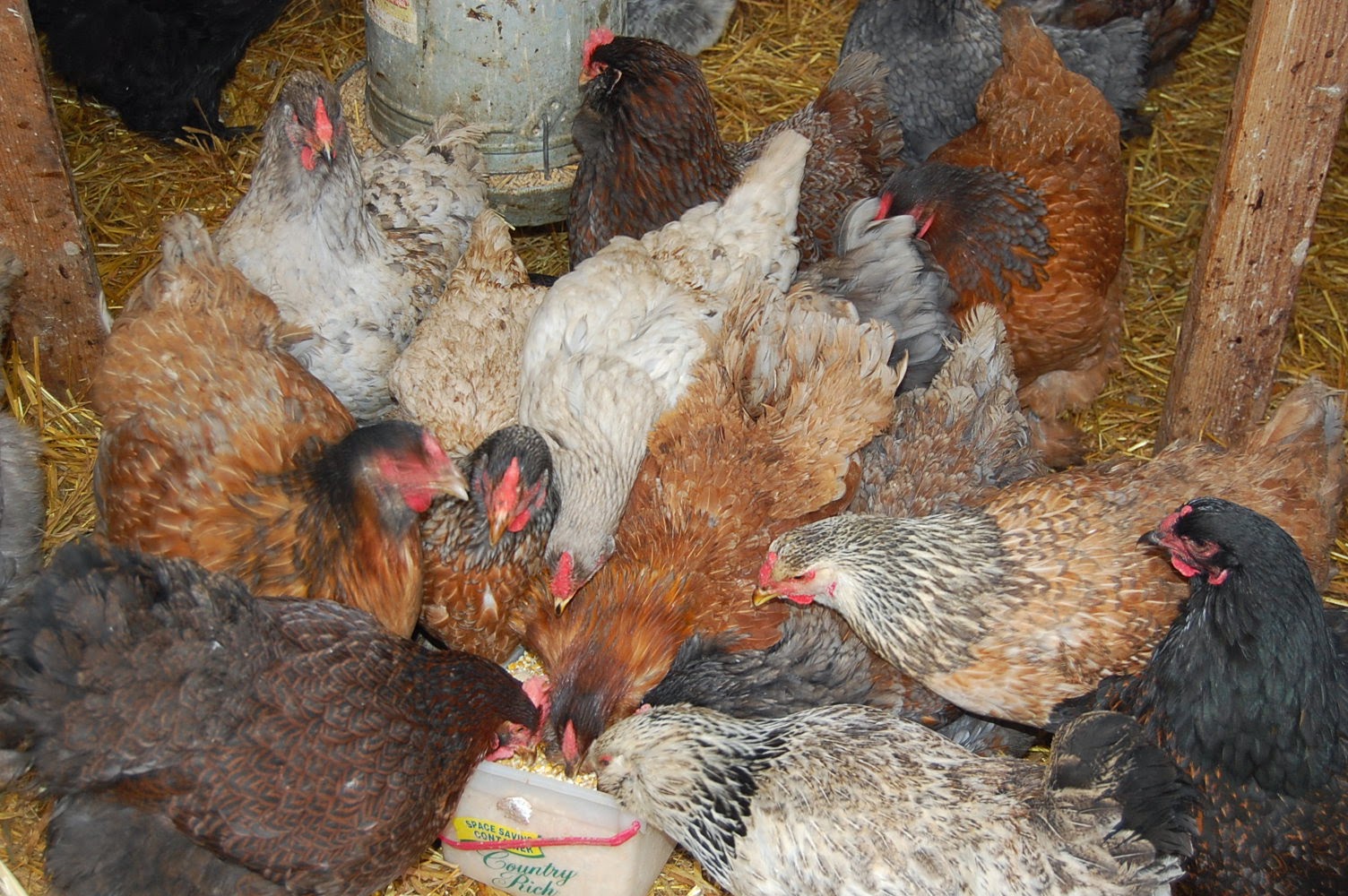 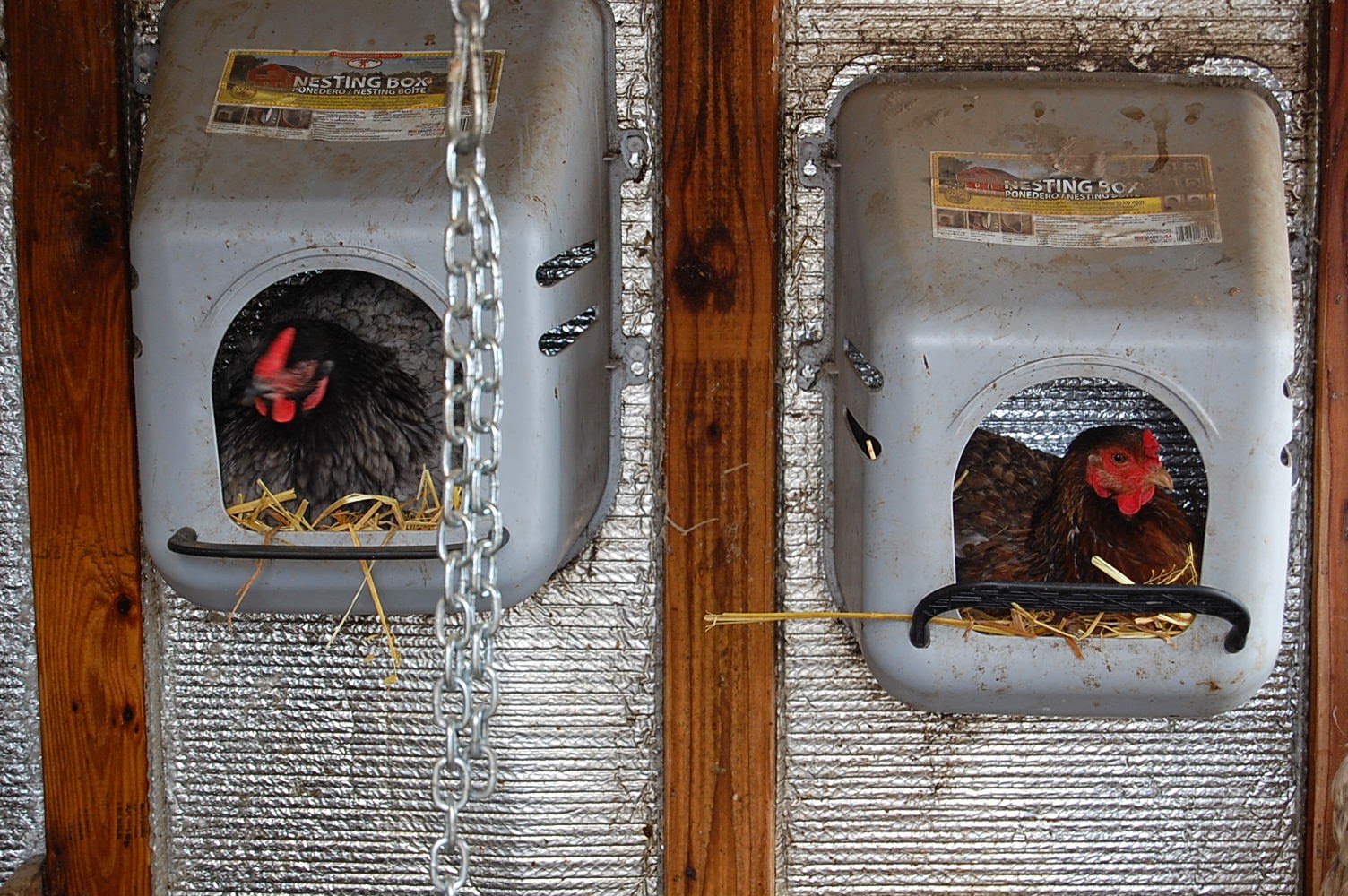 The cats seem to have gone a bit stir crazy today. I wish I had nice days forecast so they could go outside soon.
Posted by tpals at 11:43 PM No comments:

Today I took advantage of relatively mild weather (almost made it up to freezing!) to muck out the chicken coop. It couldn't be a proper clean because the bottom layer and around the walls was frozen, but I hauled away 7 wheelbarrow loads to the compost pile. Wow, I am feeling the effects tonight from all the unusual activity!

It was really fun though to spend most of the day chatting with the flock because they were all right in there helping. Imagine their delight to find a layer of dry dust underneath! Suddenly the coop looked like a decadent bathhouse with everyone taking advantage of the opportunity to fluff and scummage around on their sides. I think they are a bit tired of the snow already, poor dears.
Posted by tpals at 8:10 PM 1 comment:

Only two posts in all of last month! It seemed like being caught up in nothingness. No sun so no solar power; no eggs so even the chickens felt like they were in a holding pattern; nothing exciting at work.

Well, things have changed somewhat. Although much colder, we are seeing a few days of sunshine in the week. My son's work shift was shut down requiring him to switch to the week shift at a lower pay (but at least he still has a job). Probably the happiest news is that the 16 chicks from last spring have begun laying. And WOW! are they laying. We're averaging a dozen eggs per day including Pippi and Poppy's greenish/blueish eggs. I need to get a couple more nesting boxes put up so they don't feel the need to double up in them at the same time. :) I'm so glad I got the ceiling insulated for them; although with the recent plunge in temp there is frost all over the inside of the coop now.

I've been watching a show called Pioneer Quest where I've learned that what I really need to keep them warm is being housed with a cow. Lol. If you enjoy historical 'reality' type shows you should put it on your watch list. Basically, two couples are put into an undeveloped section of land in Manitoba with the equipment homesteaders would have had and spend a year as settlers from the 1870s. The good: no matter how hard they thought it would be, it was harder and we get to see that. They learned so much and came to love it there. The bad: the producers should have done better before starting by making certain they had the right equipment and supplies. Also, expecting strangers to live together like family was stupid and not something real settlers would have done. Of course they chose to build two houses. If they had wanted them to stay in one they should have begun with real family members.

One of the original couples had to leave at the beginning and I wonder how the year would have gone differently with them instead of the replacements. I suspect they may have been more suited to the isolation personality-wise although they were about a decade older and may have found the work difficult. Were there many homesteaders starting out in their fifties?

I definitely liked the young couple better, but I recognize that is mostly because (as everyone who knows me realizes) I'm not a people person and would hate living with someone who needs social interaction. 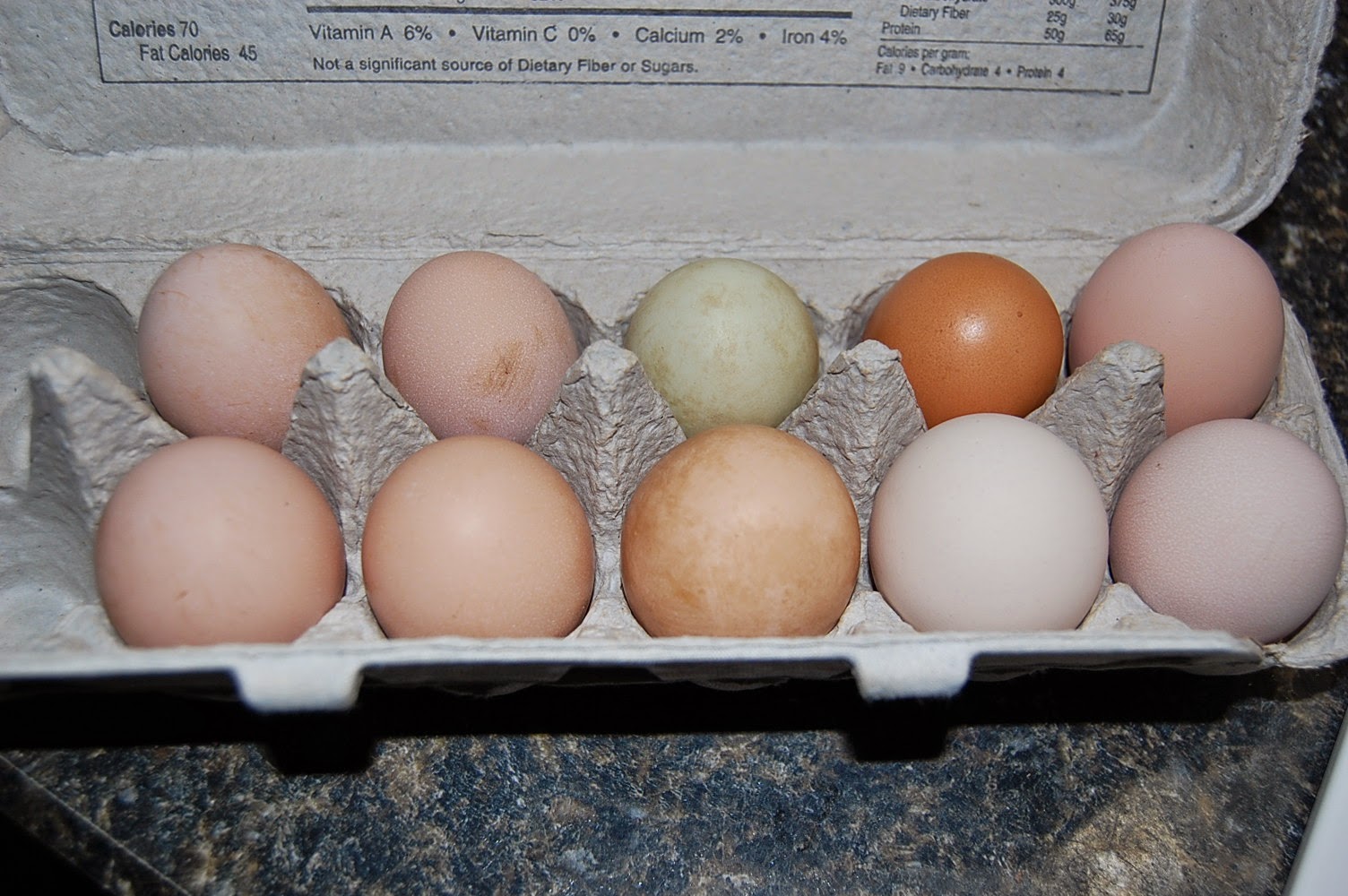