I hatched 23 chicks out over the weekend. All perfectly cute, of course. 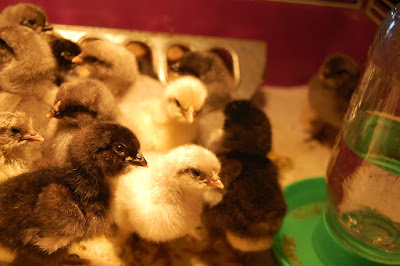 I decided to trade them for these Americaunas, because the two I currently have, Pippy and Poppy, are older and no longer laying. Not only will these bring more blue eggs, but also those adorable muttonchop whiskers. 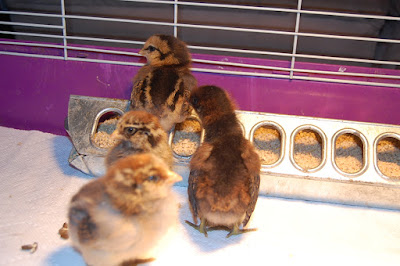 My friend sent a picture of her kids tunneling in the snow drifts. I can remember playing in the snow, so why isn't it fun anymore? 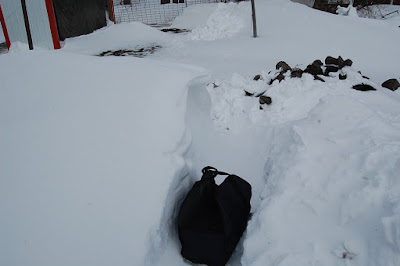 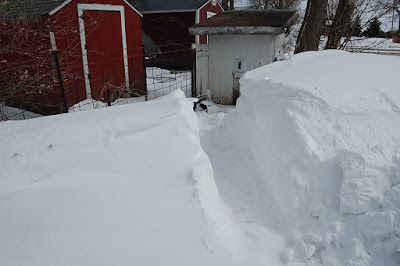 Instead it's just a chore to get through to reach the chickens and firewood. And those would have been some great drifts to play in!

For the record: I haven't even begun to dig out my car. Chickens = vital. Transport = whatever.

Possibly more snow on Wednesday. Hopefully they are wrong about that.
Posted by tpals at 11:07 PM 4 comments:
Labels: weather

Susan slid the pans of banana bread into the oven while listening to the murmur of Iris and Mrs. Perkins chatting in the living room. "Grace. Grace. Grace."

Susan jerked upright in surprise, finding a smiling Mrs. Perkins standing behind her. Feeling silly, she explained, "I was practicing. I've gotten into the habit of calling you Mrs. Perkins and since you asked me to use your given name..."

Her friendly neighbor laughed delightedly, "What a clever idea. Now, can you come join us? Iris is telling me about her childhood."

"Let me finish washing the mixing bowl. Banana dough seems to turn to cement on me if I don't deal with it quickly." A few minutes later, Susan settled in with her latest crochet project and prepared to travel back in time with her companions.

Iris was reminiscing, "In a way, I had it easier because I was born in 1929, so I couldn't remember a time before the depression. With six older brothers and sisters, of course I heard about the good times, but they were like fairy tales. My father was a clerk in the bank before the crash. He wasn't one of those speculating on the stock market; even then there wasn't that much spare money to invest. I didn't understand what was happening, just that one day he didn't put on his suit to go to work; instead, he went to work at Grandfather's shop."

She paused to peer at Susan, "You won't know what a setback that was to him. Working at a bank was a good position with prospects. Having to ask his father-in-law for a job was a blow to his pride. I don't think he ever fully recovered from that. My sisters told me he used to tell jokes and dance around the kitchen with our mother. I never knew him like that."

Susan watched her blink sadly; her eyes seeing people that had been dead for decades. She had noticed before that Iris seemed to recall long-term memories clearly, but had no concept of current events. Grace, on the other hand, acted as a bridge between the generations; old enough to share some of the same experiences as Iris, her keen mind was still interested in today's news. She spoke, "I was born in '34; not a good time to be adding to the family. Family legend has it that when my mother found out she was expecting again, she sat down and cried; worried sick I would be another set of twins. Sometimes I wish I could go back and reassure her that it would all work out and happier times would return."

"That would be nice," Iris perked up. "I could tell Gladys not to marry Harvey, but knowing her she would have found someone else just as dreadful."

"Are you both the last of your families?" Susan asked.

Grace shook her head, "My youngest brother, Benjamin, lives in Canada. He was always my favorite; nothing could stop him from living the life he chose. When he was sixteen he told our parents that he loved his best friend and they threw him out. He came and lived with Ned and I until he finished school. Then, in 2005, Benji and Matthew flew us up to celebrate their wedding. Imagine waiting fifty years to be able to marry the person you loved!"

"I think I could have been a lesbian," Iris offered wistfully. She sighed softly, then looked over at Susan, "Are there any cookies left?"

Pulling her startled thoughts together, Susan nodded and went to fetch a snack; wondering if they would ever hear more about that story. This was becoming their comfortable routine, with Grace stopping by mid-morning for a visit while her husband joined his friends at a diner for coffee and gossip. Susan had made doilies for Iris's chairs and was working on a table runner now. In the afternoon, Iris would doze while watching soaps until Susan returned to make supper.

Smiling as she arranged cookies on a plate, Susan wondered if Iris was really as dotty as she seemed or if she dropped conversational bombshells for fun. Either way, she wasn't boring.

That's certainly how it feels. About a week ago I looked out at a robin sitting on a bare lilac branch as the snow fell and thought the caption would read "The travel agent lied!" Today, there he is again; same branch, more snow....poor thing.

Wasn't it the old tradition that potatoes should be planted in March? Ha! It's April and the ground still hasn't thawed. I'm suffering from gardening withdrawals.
Posted by tpals at 2:49 PM 4 comments:

I've added a new tab with another story I'm currently working on. This one is completely unrelated to my Errant Thoughts story which will continue to be posted on the Main blog page.

I hope to convince my son to be a co-author as an experiment with bringing in more action; as opposed to my normal character driven writing. It will be trial and error so another adventure!
Posted by tpals at 10:04 PM No comments: 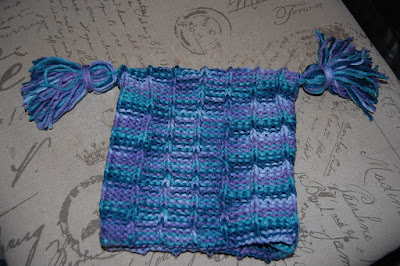 Called a toddler's hat in the book, it was a fast and easy(even for me!) project. And my great-niece looks adorable (of course) in it. :)
Posted by tpals at 9:37 PM No comments:
Labels: knitting

A few months ago when I started up with knitting again, I checked out three books from the library for ideas. I quickly realized two of them were to difficult for my skill level, but the third turned out to be a treasure trove. 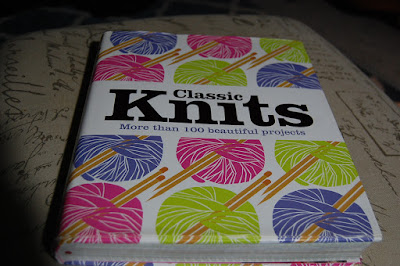 I kept it checked out for two months and barely scratched the surface of all the projects I wanted to make, so I looked for a used copy to buy. Hooray! I now have my own and can knit as slowly as I need. 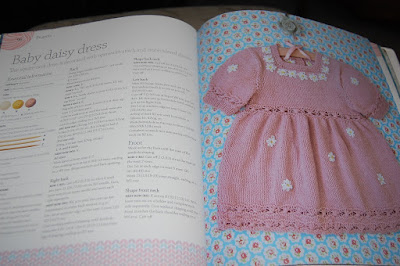 The best part for me is there are easy ideas I can do now and moderates for when I get more experience.
Posted by tpals at 12:33 AM 3 comments:
Labels: knitting

I've actually had the knitting part of this project done for some weeks, it's the sewing it together that took longer to find the motivation for... 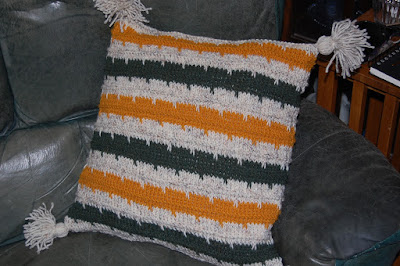 I'll be sending this to my sister who is a Green Bay Packers fan.
Posted by tpals at 10:05 AM 2 comments:
Newer Posts Older Posts Home
Subscribe to: Posts (Atom)