How can a south wind be so bitterly cold? It made my face hurt just bringing the dogs in. I'm glad I got plastic up on my son's windows last week. He is in a southeast room and would be chilly tonight otherwise.

I got another present! The only gift I gave this year was to my friends, Michael and Carrie; they received knitted washcloths. Because I'm a novice knitter these took months to make! But that's partly due to my only knitting when I watch tv and I simply don't spend much time doing that. They gave me a book on green gardening. Two gardening books this year!

I've been watching a show, on my computer, called The 1940s House. I've thought about what it must have been like dealing with wartime rationing but this really brings it to life. The main difference from the show and what I've read is they're not dealing with the queues to get their rations. Still fascinating.
Posted by tpals at 8:42 PM 1 comment: 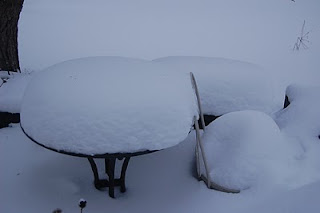 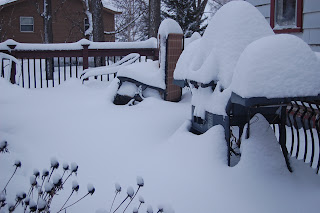 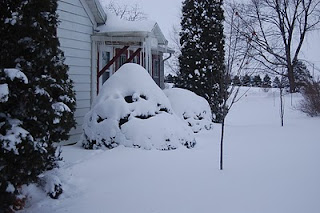 As you can see, lots of snow but not much wind. The official tally is 18 inches.

The interstates are closed for the duration and we're under a blizzard warning for all of Friday. Saturday afternoon the snow is supposed to end but the winds will still be 25-30 mph. Sunday will be dig out day!

My son and I had decided to basically skip Christmas this year; we don't really need anything and wants aren't in the budget. Imagine my surprise when the UPS man dropped a box off in the garage (he never comes to the door). My sister had peeked at our wish list on amazon and sent R a years subscription to xbox live and me a book on year-round gardening! It certainly seems funny to be reading about gardening in this weather.

The power is holding steady, we've got plenty of food; the most onerous chore tomorrow will be taking the dogs outside. Stay warm and safe.
Posted by tpals at 10:48 PM 1 comment:

I know this puts me in the minority but I don't like Facebook. I'd much rather spend my time reading an interesting, thoughtful blog post than the little dribbles of information that are being dashed off on a wall. I don't need another site to play games, Pogo has more than I can use now. I've got co-workers trying to add me as a friend who are not my friends!

For me, it's become more bother than it's worth so I will probably drift away from it...and not miss the wall at all.
Posted by tpals at 11:22 PM 3 comments:

The Politician vs The Snow

This made me laugh; the governor and several top state officials flew into town to tell people not to travel during the storm. Yes, it's a big storm coming. Yes, it will be dangerous to travel. But, why was it necessary to use state funds to fly from the capital to another part of the state to issue a statement about the weather forecast? Seriously?

Tomorrow we are supposed to see the beginning of a massive 2-3 day snow storm with accumulations of 12-18 inches and strong north winds. It's very likely that the interstate will be closed on Christmas Eve and Day. If this system is anything like the prediction, I suspect Sunday will be the first time we get out again and that's only if the wind goes down.

Because I'm getting older, I suspect, this makes me think of other big storms. The winter I'm remembering now began in November 1996 with the worst ice storm I've ever seen leaving a solid 5+inches of ice coating everything. After that lovely beginning we were subjected to a series of snow storms but the winds were the killers. Every time the roads were plowed, the wind blew the snow right back on leaving 20 foot drifts in places. The roads around town were blocked for a week. No mail, no groceries, no wonder I over-prepare! Some roads were blocked for over 2 weeks. The tragedy from that winter were the over 36,000 cattle that died.

I don't expect anything like that...at least not yet! I should have some great photos later in the week; that is, great if you like white.
Posted by tpals at 6:05 PM 2 comments:

Yesterday I got my hair cut; the first time in 15 months (how's that for frugal?). Last time I washed it, it reached well down my back. Today, it brushes my shoulders. What a strange feeling!

I went to a stylist recommended by a friend and am very pleased. If you ever happen to be in Sioux Falls in need of style, definitely check out Serendipity. I've noticed before that the purchases I have the most satisfaction in come from a salesperson who has taken the time to really talk and find out what I want and need. That is what Beckey did, a thorough discussion of what I wanted and what would flatter my face. Once we settled on the style, she found pictures so I'd know exactly what we were aiming for.

What is funniest is how many people don't look at me. My son and my parents didn't even notice!
Posted by tpals at 10:36 PM 2 comments:

Composting in the cold

What do you do with your compostables in winter? Last winter I just kept adding to the compost bin outside but this year I keep thinking there should be a better way. Our winters can be brutal and who knows when it will get above freezing again...it could be months!
Posted by tpals at 10:24 PM 1 comment:

Friday night is date night for my teenager so I'm on my own. I'm definitely getting the hint of how the empty nest will feel. It's...strange. On the flip side, I wonder how my brother is adjusting to having another adult in the house fulltime after living alone for so many years.

Outdoors we are still in a deep freeze with no sign that we will rise above freezing in the next five days. I think that makes this a good time to curl up with a book and a cat (I choose the book, the cat chooses me).
Posted by tpals at 5:56 PM 1 comment:

This morning started off with the buyers coming to pick up the elliptical. They were happy to get a good piece of equipment and I was happy with the cash and extra room in the exercise room.

This evening, my son went to get the mail where he found notification that he's been accepted to university!!!! I would do a happy dance but would probably embarrass him in front of his girlfriend. :)

On the down side, it looks like the snow is here to stay. Unfortunately, that also drags the temperature down and having the furnace running dries out the air. Ready for springtime, anyone?
Posted by tpals at 9:15 PM 3 comments:
Newer Posts Older Posts Home
Subscribe to: Posts (Atom)