My parents went south to get away from the winter weather for a little while. Except, it followed them! They were in Flagstaff the week it received 54 inches of snow (though they scurried out before getting stuck there). Unusually cold everywhere they went and an illness decided them on returning home. That took a bit longer than expected...three days snowed in a hotel in Amarillo, followed by a painfully slow drive through Oklahoma. What a relief for them to be safely home again!

I did enjoy some nice chats with the hens in their absence. The turkeys especially were fed up with having to stay in the barn with all those chickens and swallows for so long. It's a good thing the barn is spacious because there was nothing good for them outside besides deep snow and bitter cold. Every egg was frozen solid and split open. Of course, the swallows could have gone out at any time but why should they when there was shelter, corn and water inside?
Posted by tpals at 11:40 PM 1 comment:

Scenes from the back door 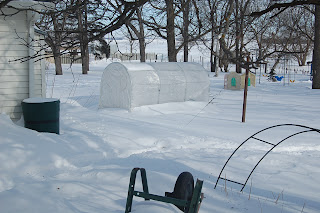 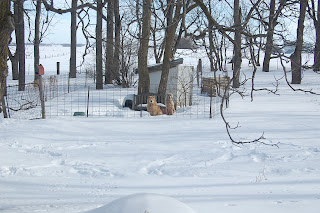 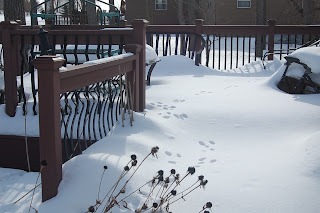 The only ones relaxing on the deck are the rabbits. Can you see why I'm dreaming of spring? 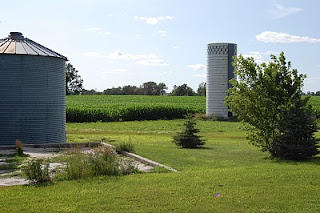 This picture (from last summer, obviously) is of the family farm I grew up on. The land is rented out now that my dad is retired but I still feel a connection to it. The corn field there was a cattle pasture when I was young and I spent many hours roaming and playing the summer hours away.
I've been watching a recent UK program called My Dream Farm (in spurts because we kept losing power with last night's freezing rain). I definitely understand the appeal to getting back to the land, being raised on a farm combined with a personality that likes to put deep roots down makes it a strong pull. Naturally, land here is much less expensive than the UK; we also don't have the uber-restrictive regulations and high taxes to contend with. On the negative side, our winters are generally much harsher, the economics of farming are dire, and the farms aren't usually so breath-takingly beautiful.
Ideally, I'd need to be independently wealthy to farm (especially on the small scale which is all I'd be interested in). In reality, I'd have to have a partner/husband who farmed while I continued working. I did wonder why the wife in the show wasn't out working because that's the only way small farmers can survive these days (here, at least, maybe not in the UK). Still, it's something fun to think about.
Posted by tpals at 10:48 AM 5 comments:

From fog to frost 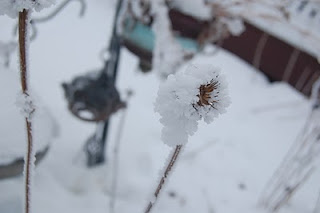 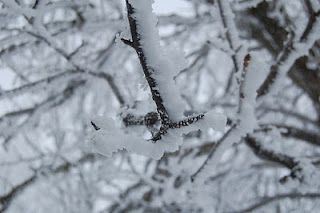 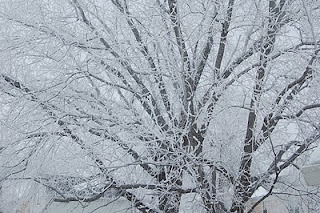 Sometimes pictures say it all. With the sky so close to being solid white, it made for some strange twists for the eyes. 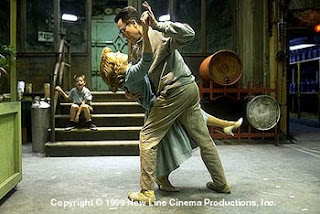 Just a peaceful Saturday and I was in the mood for a movie. A light-hearted romantic comedy designed to make me smile was just the ticket so A Blast From the Past was my choice. The acting is a delight and the entire concept entertaining.

Part of what I like about the movie is seeing the setup for the fallout shelter. While I wouldn't want to be underground, having the ability to be completely off the grid and independent (comfortably!) for thirty years is very cool.

My son likes it if I read his books; it gives him someone to talk to about them. Most recently it's been Warhammer books...good thing I don't mind military sci fi! The illogic of this latest one is bugging me today. Basics: a group of elite modified soldiers gathers up hundreds of the best (brave, intelligent, pure {boys???}, etc.) boys and has them fight in a giant melee until only two are left. Those two get to join the soldiers. So, what we have here is a group that culls the cream of the gene pool (male at least) before they are old enough to pass that on to the next generation. Uh huh.

It would be like having a mandatory draft and world war every generation. Yikes!
Posted by tpals at 3:37 PM No comments: 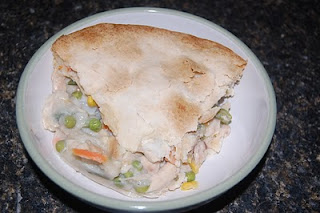 As I've mentioned before, I'm not a good cook; if something can be messed up in the kitchen, I'm the one to do it. Mostly, I don't even try anymore. So, when something goes right it's time to cheer. Last week I cooked a whole chicken, then I used the leftovers to make this chicken pot pie and it was edible! Not only a shock to have two things turn out right, but fascinating to see how many meals can be made out of one bird.

While skimming through my spam folder to make sure nothing important had been misfiled before deleting the lot, my brain translated one of the subjects as 'wooden pole attracts ferns'. That got me to wondering why a non-climbing plant would be attracted to a pole...until I read it again and realized the 'ferns' were actually 'fems'.

I am blessed with kind neighbors. With the real temperature and wind chills ranging between -25 and -40 day and night since the last snowfall I haven't been able to clear my driveway. I could get over it, but the next snowfall would have made a real mess. Yesterday, while we were gone, my neighbor brought a tractor over and cleared my drive completely!
Posted by tpals at 8:39 AM 1 comment:

But why is a south wind so cold?

Today I took my son and his girlfriend to town so he could buy jeans, eat chinese, and see Avatar. It was a good (but exhausting) day. This evening I decided to relax with my knitting and watch a movie in the living room. It's on the southwest corner of the house with three south and four west windows. Part way through the dvd I realized the breeze was too distracting so I used the last of the shrink plastic on the south window right next to the couch.

It's supposed to start warming up tomorrow...but it's hard to tell tonight!
Posted by tpals at 11:09 PM 1 comment:

I've been struggling with the decision of which credit card bill gets the snowball thrown at it next. While I would love to tackle the smallest one and have it finished by April, the part of me in charge of worrying has other plans. In May I will lose 20% of my monthly income. That's not as scary as it would have been a year ago before I started paying off my debt since I now send about 50% of the income on debt payments. So, my snowball will shrink but I'll still be okay. What worries me is that my largest balance is with Chase cc and they raised the minimum payments to 5%. If I was ever late I'd lose the not-so-bad interest rate of 4.9% and find myself with a crippling rate of 29.9%. I feel like the safest option is to pay down Chase as much as possible, that way if I had an emergency that took more than I have in savings, it wouldn't be such a struggle to keep up with the minimums. It's going to feel like a long journey to get them paid off though (estimated October).
Posted by tpals at 9:37 AM 1 comment:

Today is definitely one for having a moan. It's bad enough to be feverish and achy but feeling cold all the time drags down my mood. On top of that we've had another 4 or 5 inches of fresh snow and the wind is supposed to blow like crazy tonight and in the morning. With luck, the weatherman will be completely wrong and we won't get a puff of wind at all.

I have three pulls in my life: green, frugal, prepared. Sometimes it's easy to work on all three; other times I find myself trying to balance when pulled in different directions. My main focus has probably been on frugal for the last year. I think the results show that it is certainly worth the effort; 42% of my debt paid down in 11 months. The funny thing is, the more I do, the more I want to do. I cancelled Dish tv, I've stopped drinking pop and I keep wondering if there's anything else I can sell that would bring in decent money (the bowflex got picked up today).
Posted by tpals at 9:40 PM 2 comments:
Newer Posts Older Posts Home
Subscribe to: Posts (Atom)