All the chicks were moved into their new home yesterday. That includes our nine two-week-olds and the 75 mail order chicks that are one week old.

A few explore far off spaces: 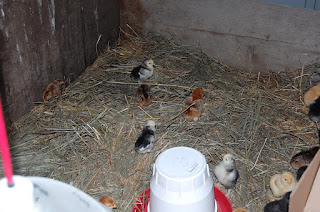 While another chooses to stay close to the comfort of warmth and food: 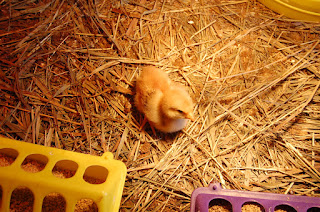 The difference one week of growth makes is startling: 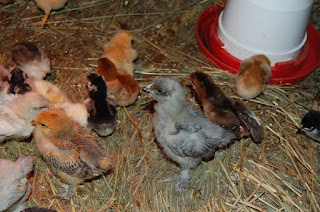 Many of the youngsters hide inside a box: 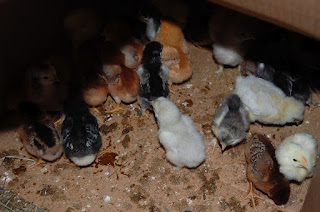 But the 'big kids' always have followers: 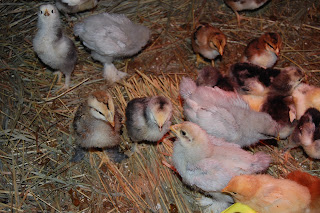 It's good to see that the older chicks don't pick on the younger ones. It was fun to have mine flap over to say hello; I've missed them too.
Posted by tpals at 7:50 PM 1 comment:

The decline of journalism

I remember a time when journalists were expected to be excellent with grammar and spelling. How could they not be when their work would be read daily by thousands? I'm not sure what the qualifications are now, but communicating in English is apparently not one.

Example: www.keloland.com had this piece today:

The newest member of the Rapid City Police Department is a 2-year-old Dutch Shepherd from Holland named Xander.

Xander is certified for patrol duties such as tracking, evidence recovery and building searches but is also certified in detecting narcotics.

The dog lives LaHaie, and the two have developed a close bond. LaHaie says he interacts with Xander like he would a normal pet, but there's also a serious side.

Xander's cost to the department including training and travel expenses is close to $14,000.

At first I thought keloland was to blame, but on digging further it appears this is copied straight off the AP (which did a miserable job of cutting down the original report). Unfortunately, when I found the original it had more information, but the structure was even worse.

He's traveled from overseas to be the newest member of the Rapid City Police Department's K9 Unit.

Xander understands commands are in Dutch and German.

Officer LaHaie says Xander lives with him and the duo develop a very close bond.

"We interact like you would your normal pet, but there's also a serious side. When I tell him to do something he has to do that for me. So we get to play, so the bond is greater then somebody with a normal pet, but I spend more time with him than I do my wife," says Officer LaHaie.

Perhaps part of the problem is in the old days an editor would have bled red marks all over this before throwing it back to the writer. You would be forced to learn just to avoid the humiliation!
Posted by tpals at 2:26 PM 1 comment:

The good news is that all the new chicks arrived well and very thirsty. Naturally, they are adorable and I am very relieved not to face a massive die-off from the delayed delivery. According to the email response I got from the hatchery, because of a contract with the airlines, Saturday is the only day they ship. Insane.

The sad news happened as I drove home; two dogs raced in front of my car. The little one made it past, but the rottweiler was struck by the front bumper. That noise of fright and pain nearly broke my heart. Ironically, the mother had just sent her son to call the dogs in. I sent him back to get his parents and explained what had happened. She was upset, but not angry. There wasn't any blood but I'm not sure about his legs. It seemed like a very sweet-natured dog and I hope he recovers fully.
Posted by tpals at 10:01 PM 1 comment: 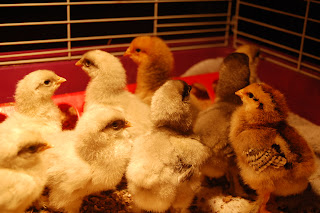 Wing feathers are coming in and it's fun seeing the different colors develop. Zen Chicky, the one of the far right, is still the bravest. I hope it's a hen!

It has been a cloudy, wet weekend, but the storms went south and there was no damage locally. Finally the rain barrels are full!

The chicks I ordered for the farm were supposed to come next week. Little did I know the hatchery would ship them on a Saturday morning! Knowing they are stuck in a box inside a post office waiting for the Monday truck has left me with nothing but contempt for the timing of a company that has had decades of experience dealing with the postal service. We shall see if they respond to my email on the subject.
Posted by tpals at 6:51 PM 1 comment: 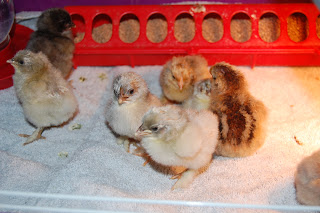 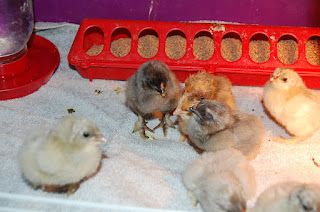 Out of the twelve eggs I put in the incubator, eight have hatched so far and one more is pipping. Frodo is a daddy!
Posted by tpals at 10:40 PM 1 comment:

Our cats teach contentment with life: 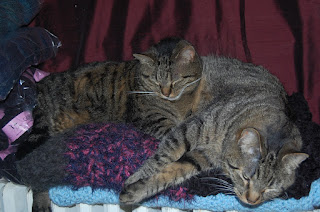 A truce is called so all could bask in the evening fire. 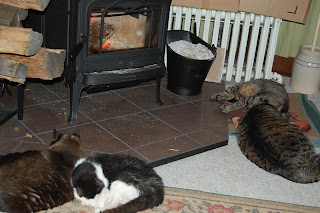 And when adventure calls, Trigger is the first to volunteer. 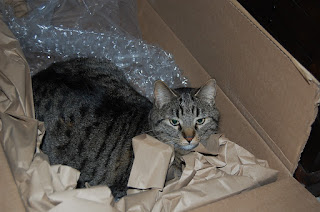 This week I finally caught a breather from work and quickly opted to take a few days off. It's been lovely to stay home and center myself again.

I got to meet the newest addition to the family: my niece's first baby - so small and perfect! Somehow it felt right that he was born in the spring when the pastures are full of new lambs and calves.

I haven't done much in the garden yet; we are forecast to drop below freezing next week. I did move the garlic volunteers into the polytunnel and talked to the neighbor about tilling.

Otherwise I've been relaxing, tidying and taking stock of things. Like the cats, I'm very happy to be here.
Posted by tpals at 3:43 PM 2 comments:

I tackled one of the big projects on my to-do list Saturday: spring cleaning the chicken coop! Sweaty, smelly, dusty, hot and very dirty are all descriptive of me by the time I finished. I also managed to annoy the hens who insisted on sitting on the last bit of old straw until I forced them off. I was afraid my allergies would protest and they did with vengeance. For that reason I'm glad I did it yesterday in case the effects lingered.

Today I aimed lower and transplanted garlic sprouts into the polytunnel. Now the garden is clear and ready to be tilled.

Not a huge amount of accomplishments, but enough.
Posted by tpals at 10:50 PM 1 comment:
Newer Posts Older Posts Home
Subscribe to: Posts (Atom)