My blog has become terribly dull this winter. My apologies! Just think of me as hibernating...zzzzzz. Hopefully soon I'll get a good case of spring fever and go into a frenzy of garden planning and seed sorting. 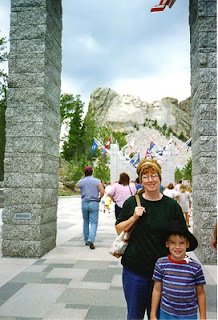 Here's a walk down memory lane. My mother and my son visiting the far side of the state.
Posted by tpals at 11:22 PM 3 comments:

Cashing in the dream

I've held onto the extra British pounds I brought home from my last trip. I always thought I'd be returning. Now I know my adventurous, solo-traveling days were in my thirties. Firmly in the grasp of the forties, I'm MUCH older, responsible (helped along by the fact that those travels added to the credit card debt I'm chipping away at), and disillusioned. So, I went to the bank and exchanged the pounds for dollars.

It's strange that 85 pounds symbolized romance and happiness. All this means is that I've accepted that I'm not going to find some amazing man to live happily ever after with. It doesn't mean that
I'm going to start acting 'normal'! I'll still keep a sword in the umbrella stand and a bobby's helmet by my desk and avoid facebook as much as possible.
Posted by tpals at 6:00 PM No comments:

We got another 7 inches of snow yesterday. For some reason, it was hours after the snow quit before the town began clearing the streets. There are only three streets, so it's not a major job! My neighbor came over and cleaned out my driveway before the streets were begun.

I've been streaming The Dick Van Dyke Show on my computer with my free month of netflix. These were from before my time, so a different world to me. Fun fact: Klingor from MASH was the coffee boy on these early shows.

Is it possible that a cold can cancel the effects of perimenopause? Last night was the first time I had hot flashes since I caught the cold a couple of weeks ago.
Posted by tpals at 5:56 AM No comments:

I'm still alive! Although my son says I sound like I'm dieing. My cold has settled down to a nagging cough; it doesn't hurt...just annoys.

I've got six vacation days left which I'm going to let carry over to next year. A lot of people will be taking next week off so work should be nice and quiet. I'm also working on a project that, while the deadline is arbitrary, I'd feel bad if I upset the schedule and got the group in trouble. This way I can use my vacation time in the summer when I need more garden hours. :)

I did get the gamma lids I ordered onto my buckets that I use most often: flour, sugar and wheat. I've also got one on the powdered milk bucket, but I don't know if that will stay since I really bought that for emergency use. Naturally, after I had bought them, the lids are now on sale. Isn't that just typical?

I've been rereading "Lights Out". It's about an EMP strike taking out the electrical grid across the US, Canada and much of Mexico. Another attack later takes out Europe, stopping them from sending aid. The premise is obviously similar to "One Second Later", but doesn't take quite the same grim outlook. A few things bother me that I think the author skimmed over too lightly or ignored completely. The medical issues of a chaotic society seem nonexistent except for one person running out of anti-depressants and one cancer patient needing painkillers. Pets, out of 47 houses in the community not one had pets they couldn't feed? How are they cooking? Does everyone in Texas have a propane stove? Speaking of cooking; handing out bags of beans and rice to refugees without asking if they had any way to prepare it seemed odd. Texas, in the autumn, and these people are using their generator to run the clothes dryer??? There are other examples, but basically, if you can find the pdf it's worth reading. I won't be buying it from Amazon.
Posted by tpals at 12:57 AM 1 comment:

I was off the cold medicine today because it would make me an unsafe driver...zzzzzzzzzzzz. Add to that long meetings and by the time I got home I was feeling just a wee bit off. Three hours of sleep later and I'm thinking about dinner; hmmm looks like cereal again!

On the up side, my car has responded well to premium gas and no longer fights starting in the morning. Compared to the cost of taking it in for work, an occasional splurge on the good fuel will be worth it.
Posted by tpals at 11:27 PM No comments:

Starting to feel human again...increased cold medication and a nap next to the vaporizer helped. Bonus: when I looked outside the neighbor had cleared off my driveway!!!
Posted by tpals at 6:37 PM No comments:

My first winter cold of the year. It feels like my face doesn't fit on my skull. My nose refuses to have anything to do with breathing. Cold medication has zero effect.

These are supplies I keep in the basement. It's a combination of useful and emergency items.

Most of the top shelves are for an extended stay in the basement. A bad tornado could see us trapped there or nuclear fallout could require a very long stay. At the top is an air mattress and pump with extra batteries. Below that are mainly emergency items including matches and anti-bacterial soap. 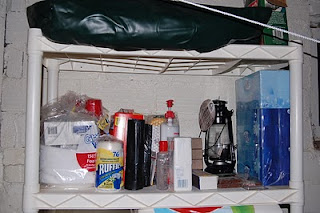 Two shelves are dedicated to my obsession with never running out of toilet paper. :) 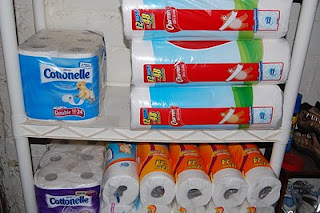 And at the very bottom is a camp stove with propane bottles. Also stored around the basement are baby wipes for hygiene, a kerosene space heater and fuel, seeds and materials for seed starting, a hand-cranked clothes washer, first aid supplies and a bucket of comforts (deodorant, toothpaste and brushes, etc.).
Posted by tpals at 11:05 PM 3 comments:

I love peeks into other blogger's pantries so here is a look at mine. This is all in the basement. These are the main food racks holding a combination of home canned and store bought items. Mostly veggies with some fruit for variety. 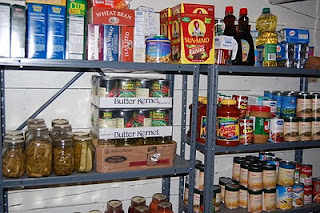 On the bottom are 2 liter bottles of water for emergency use. The main supply is the 55 gallon barrel but these are easily portable. Some things are used normally, others are for dire times. For example: the gallon of local honey will be used eventually (and I wish I'd bought more when it was available!) but the lard is an if-when item. 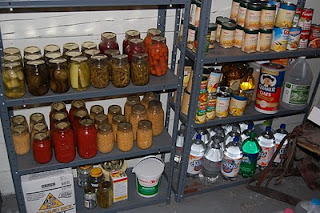 Here are my long-term supplies; foods that are purposely packaged for a long storage life. The large buckets hold the main food supply: wheat, rice and oats while these cans are the luxury foods that will add flavor, interest and important nutrients to an otherwise bland diet. The bottom shelf holds extra canning supplies. 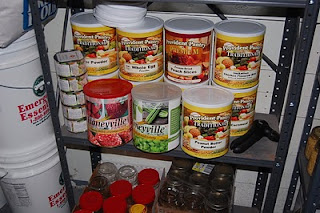 Emergency pet foods are really for a bad winter when it may be impossible to make it to the store for weeks at a time. I had my parents pick up an extra 25 lb bag of flour on their last trip to Sam's. They won't go again until the Christmas madness has passed. 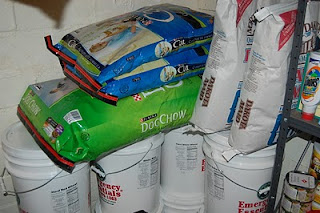 So, that's the food side. Of course there is also food in the kitchen cupboards for daily use and some things I've been stocking up on that hasn't been stored properly such as sugar, salt and powdered milk.
Posted by tpals at 10:38 PM 2 comments:

Sometimes I find myself sliding into a self-pitying frame of mind. It can come from loneliness or receiving yet another bill or all the worrying that comes naturally to mothers. This time of year can be difficult when so many people are rushing about spending money madly and not spending money is a priority for us.

When a reboot of my mental state is needed, something that works well for me is to watch The 1940s House. Seeing how the family copes with rationing and making do with less and less helps me put my lifestyle in perspective. Maybe having my hair done isn't in the budget, but I do have shampoo and soap and plenty of hot water. I may envy the guys going out to lunch at work, but my pantry has an abundance of food and I don't have to spend hours in queues to get a small quantity of supplies.

I try to imagine how we (the general we of society) would handle rationing. My son wouldn't come home every weekend because of gas rationing. That would be one of the hardest adjustments for me. The boredom of eating the same foods every day would be a challenge. Many of my co-workers would have serious trouble with coffee rationing! Like the family in the show, I think we would all learn valuable lessons in not wasting.

Reboot completed.
Posted by tpals at 10:47 AM No comments:

Shades of a garden

I like to keep some of my potted plants going through the winter. There is something satisfying about having something green to care for in a frozen land.

This geranium gives a double gift by continuing to bloom and has that special odor that shouts summer! to my brain. 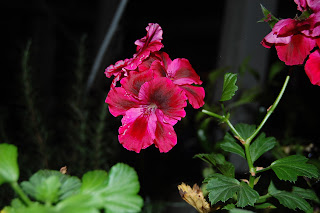 The rosemary in the foreground does surprisingly well in my cool basement. I love running my fingers through the aromatic stems. The pepper plants in the background probably won't do much at this temperature, but I already had them in pots so couldn't resist bringing them inside. 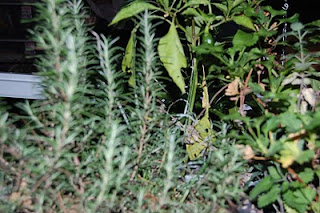 The cost of fresh greens is outrageous in the store so my Aerogardens are used all winter. It's not a lot, especially compared to an outside garden, but it's growing and sometimes that's enough to make it worthwhile. 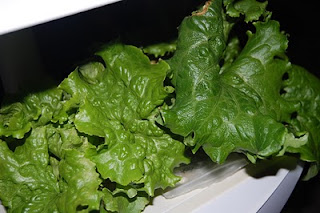 This is the material I used behind my radiators to reflect the heat back into the house and insulate the walls. Basically, it's Styrofoam with a sheet of foil attached to one side. It came in a good sized bundle so there was lots left over after the radiators were all done. 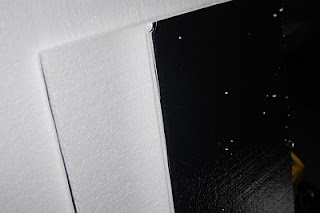 At the time I didn't have any plans for the extra, then I thought of a possibility! My old basement windows are drafty and until I can fit replacements into the budget I thought I was stuck with that. With a little creative use of duct tape I enclosed the entire window opening adding a striking touch of classic sci-fi to my basement decor. :) 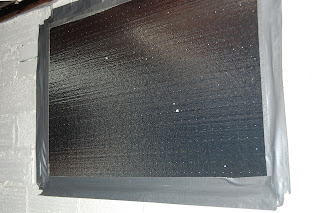 I am having a little trouble getting the regular duct tape to hold to the blocks so I'm going to pick up some Gorilla tape tomorrow and fix that. An added benefit is this blocks the grow lights from shining out and possibly annoying the neighbors.
Posted by tpals at 11:12 PM 2 comments:

It always makes me happy when my son comes home. He doesn't have classes on Fridays so last night he surprised me by showing up early.
Posted by tpals at 6:47 AM No comments:

I watched some of the footage from the EDL vs UAF protest at Bolton and I'm completely baffled. All these masses of people walked in, shouted insults at each other and left. No discussion of issues or persuading people to agree with them. So what was the point? Did they really do all that for publicity? It seems like a waste of time and resources to me.

Most of those attending would have accomplished far more by spending quality time with their families or volunteering.
Posted by tpals at 1:14 PM No comments:
Newer Posts Older Posts Home
Subscribe to: Posts (Atom)