I've rechecked my balances and ran the numbers using http://www.whatsthecost.com/snowball.aspx and the results are in! In 19 months I'll be making my final credit card and mortgage payment in the same month!!!!! I'll be debt free!

Since I began paying down debt (and not making any more) in February 2009 it will have taken me three years to accomplish. We've given up some luxuries to make this happen; dish tv, games, movies, books, cutting back on groceries, selling things. We could go farther and go bare-bones on the groceries but it wouldn't pull back the payoff date by more than a month possibly. This is what I consider a sustainable lifestyle, not a hardship and getting out of debt IS SO WORTH IT!
Posted by tpals at 11:43 AM No comments:

Family in an emergency

Something I've thought about is taking care of family in a crisis. That really is the most basic form of community, isn't it?

My parents live a few miles away. Sometimes they talk about moving south or even just to a town. I hope they never do. Instinct tells me to keep my loved ones close so I can take care of them. Even having my son thirty miles away for college makes me nervous.

I wish my brother and his partner would move here. Just getting them out of the city would help, but I want them near. (Incentive: the phone company has upped the speed of my internet connection to 3 times what it was when you visited! And that's just the basic cheap speed.)

I know my Texan sister would never move back. She would hate it and has always said her choice is to go farther south. For someone like her who is better suited for the heat it still would be nice if she wasn't in the city.

My other sister is near enough that it's not a worry getting her closer in an emergency.

Interesting that we all garden even after so many years off the farm.
Posted by tpals at 6:26 PM No comments:

The premise is the USA is targeted by nuclear devices detonating in the upper atmosphere and producing a massive EMP burst that shuts down the country. Vehicles, communication, electricity all gone in a moment. Every plane in the air comes down. No back-up generators for emergency services; everything was fried. The setting is a town in the east coast mountain country with an interstate passing through. The result was a community already over-populated being swamped with people stranded when their cars died then later the refugees from the cities.

Personal reaction: I don't agree with all the actions taken by the main character. In a similar situation I wouldn't have tried to stay there with no preparations and a diabetic child, especially since he had access to a working car. I would have bundled the family in and hit the back roads to try to make my way north on the chance that Canada wasn't targeted.

I had my son read it also. He's always been skeptical of my 'paranoia'. A few chapters in and he was looking at our kitchen and said 'it's all about the food, isn't it?'

Happily, this is a good place to live. Heavy on agriculture, no nearby population centers, lots of small farms and gardens. There would be a time of adjustment as people would need to replace their lawns with vegetables. In fact, that would be my first recommendation to people, even those who aren't into prepping, take up gardening. Learning how to get the most out of your climate and space (and improving the soil now) would pay back immensely when needed. I think everyone, even non-gardeners, should keep an emergency supply of heirloom seeds in the fridge. Such a small price to pay to be able to feed your family.
Posted by tpals at 4:54 PM No comments:

I got the call tonight that the book 'One Second After' had arrived at the library for me. They had to borrow it from another branch but that only took a week. I've just begun reading and already I can tell it's going to be hard to put down.

I've got an aversion to poorly written books (which is why I've never even attempted any of the Twilight series) but this one isn't going to be a problem.

Sigh...it's calling me back to the recliner. If I give in then I'll stay there and miss my workout tonight. Grrrrrr! I must be disciplined; this is only the second week of my exercise challenge. No, I'm going to put on my shoes and get on that bike. Day 2 out of 4 in Week 2. I can do this!
Posted by tpals at 9:45 PM 1 comment:

http://www.readymaderesources.com/ has donated a case of Mountain Freeze Dried Food to be given away by http://modernsurvivalonline.com/.

Unfortunately for my British readers, it's only availabe in the US. But I had to mention it because this is an impressive (and expensive) prize.

I've just discovered the modernsurvival blog recently and from what I've read so far it looks to be informative and entertaining (not a common combination in survival sites!). If you get a chance, check it out.
Posted by tpals at 2:09 PM 1 comment:

It is rather curious though, I had been back-sliding on taking my lunch to work (saving money and eating healthier) partly because the heat made me disinclined to cook. I assumed when my son went away for a fishing/camping trip this week I'd continue doing the same but instead I haven't eaten out once! I made a chicken pot pie, adding in wheat berries (first time cooked or tasted) which made delicious and very filling lunches. The rest of the time has mostly been cold cereal since I've had extra milk to use up.

It's a good sign for this fall when I'm an empty-nester. I may not devolve into a slovenly, fast-food junkie!
Posted by tpals at 11:09 PM 1 comment:

Just when I'm certain I'll have to start watering the garden - WHOOSH - the heavens open up and bucket down rain. (Somehow, this always happens when I'm trying to get from the car to a building, not when I'm driving or safely inside.)

It's a nice little thunderstorm going on outside right now. Perfect timing for the cucumbers and second planting of peas.

I'm also farm-sitting again this week. I was able to shut the chickens in a little early because of the dark clouds, but of course it rained hardest when I got out of the car!
Posted by tpals at 8:57 PM 1 comment:

This year as an experiment I planted a row of onion seeds next to the usual set. As I was checking them today during my weeding marathon I discovered that the seedlings are only as big as the original sets.

I'm tempted to plant more seeds and save the results for next year instead of buying more sets.
Posted by tpals at 9:54 PM 3 comments:

Does your garden/plot ever guilt-trip you? Normally at this time of year I'd be keeping on top of the weeds and well organized. It usually doesn't get crazy on me until harvesting and canning.

This year isn't going at all to plan! It seems like the only days the weather cooperates are those I have to spend at work. I haven't even kept up with the hoeing...hangs head in shame.

Today I regained a little of my garden equilibrium by spending two hours weeding the onions and carrots. It feels really, really good.
Posted by tpals at 9:48 PM 2 comments: 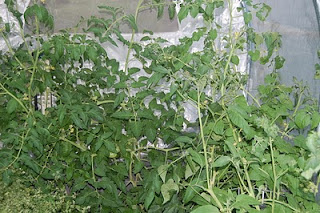 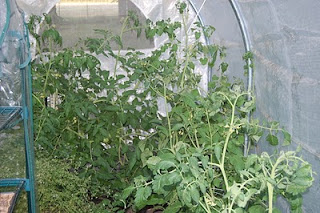 I may have underestimated how much space the tomatoes would fill.
Posted by tpals at 9:20 PM 2 comments: 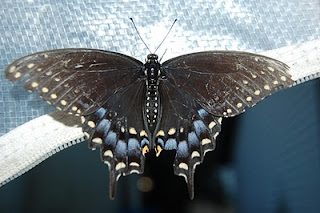 This seems to be a wonderful year for butterflies. I've noticed them all over lately. This one decided to visit the polytunnel. I don't know what kind it is, but at about 4 inches across, it's one of the largest I've seen recently.
Posted by tpals at 9:14 PM 2 comments:

I meant to take a picture of the whole chicken I cooked today but when it was ready I forgot and it's in pieces already. I used the recipe found here: http://www.easy-crock-pot-recipes.com/crock-pot-whole-chicken.html

I finally planted out the chokecherry and gold currant bushes. These jobs would go a lot easier if it weren't so very humid again. I put them along the sides of the dog pen. It's the safest place from the lawnmower (other than IN the dog pen which they probably wouldn't survive).

I also rediscovered the garlic plants. The potato row sort of went mad in a sideways direction and enveloped them. These are the potatoes that haven't blighted so I'll forgive their wayward tendencies.

The zucchinis (courgettes) are coming along delightfully; fruiting strongly so far. And I've heard that the extra seedling I adopted out has grown very large and is thriving in it's city home.

Cucumbers and green beans are also setting young produce and the tomatoes in the polytunnel are looking like wild jungle creatures. That's my fault for putting so many in; I need a larger tunnel!

My niece's wedding is just 5 weeks away. I really need to figure out what to give them but their gift registry items are so boring! The bridal shower was fun. The first I've gone to (elopements run in our family).

We went to see Despicable Me last night. Very funny and thoroughly enjoyable. Right up there with Monsters, Inc for original material.
Posted by tpals at 5:26 PM 2 comments:

I had quite a bit of cream left over this week so decided to make homemade ice cream for the first time. My parents came over to try it (guinea pigs) and stayed to watch an episode of Midsumer Murder.

Delightful evening. Next time though, I'll make sure to invite enough people over to eat it all up. :)
Posted by tpals at 10:16 PM 5 comments:

Again with the comments

I've disabled anonymous comments. The only ones showing up were spams and I'm sick of them.
Posted by tpals at 11:18 AM 1 comment: 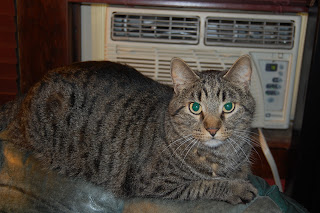 I finally gave in to my weakness and put in the window air conditioner. Today is heading quickly to 90 (32 Celsius) with 90% humidity. I have so much to do but it's hard to motivate myself when I'm drenched in sweat even indoors. As you can see from the photo, Trigger knew exactly who deserved the best seat in the house.

Yesterday I bought mosquito repellent. I had some older stuff but the harsh chemical stench turned my stomach. This is much better. We've had a terrible time with mosquitoes already this year because of all the rain.
Posted by tpals at 11:05 AM 3 comments:
Newer Posts Older Posts Home
Subscribe to: Posts (Atom)