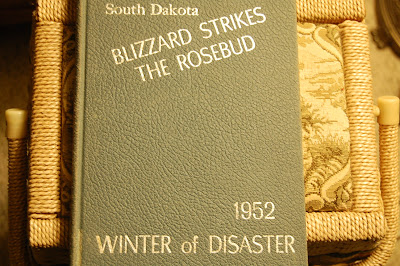 This is a book I've wanted to read for some time. Compiled by Mrs. Walter Hellman, it contains the experiences of people who lived through one of the worst winters recorded.


A brief recap to set the stage: in November 1951 the winter storms began and grew progressively worse until the first major blizzard on December 6 which blocked roads and left large snowdrifts. On January 11 the drifts (and everything else) were coated with a thick layer of ice. During this time the roads were only clear for one to two days at a time before drifting shut again. Thus, when January 21 started as a warm, sunny day, many people headed to town for supplies and children were in school. The first storm reports caused some to fetch their children home (or attempt to).

My mother remembers when the blizzard hit it was like a 'wall smashing into the house'.  Zero visibility and strong winds left dozens of vehicles stalled or stuck and the occupants had the option of sitting it out for what became 48 hours or attempting to walk to the nearest farm. Eight people died of exposure and many more treated for severe frostbite.

Digging out after the storm presented new challenges. Clearing the roads overwhelmed the equipment available in the counties. Supplies had to be flown to some who couldn't be reached by road. One farmer had to dig down through eight feet of snow to reach the roof of his chicken coop.


There were 31 days of blizzard conditions recorded (and few days spent in school). The last blizzard of that winter was on March 29. The flooding that followed the thaw was extensive and caused massive damage. It's not surprising that those who lived through it never forgot that year.

We are currently in the middle of another unusually mild winter here in South Dakota. It's best if we remember that extreme winters have struck in the past and will again. The short-sighted (and rather stupid) people who ran out of food during the ONE day blizzard we had a few weeks ago would do well to learn from their experience.

It wasn't an ambitious day for me. My son went ice fishing with friends so I've been on my own all day. Still very cold out so right after lunch I brought the dog back in and collected the four eggs that had been laid since morning chores. I sewed some hangers onto the blankets used over my son's bedroom windows to make them more secure and easier to put up. Other than that I watched lots of New Tricks and enjoyed a quiet day.
Posted by tpals at 11:42 PM 1 comment:

Whew! I'm beat tonight. More plastic on the windows today: living room, kitchen, and bathroom for a total of ten windows. I know it's important; I could feel the cold air coming in around the edges as I was taping and covering them...if only there weren't so many! The only room I won't do is my son's. His bed is against both windows so the plastic never stays in place. Instead, we hang blankets over them.

According to the weather forecast our cold spell is going to continue all week. It feels like a waste now that the young hens have begun laying when the eggs freeze solid and crack open before I can collect them. All the chickens are in good health, which is the important thing.

This is definitely a night for going to bed early!
Posted by tpals at 9:44 PM 1 comment:

After months of back to back projects, I've finally caught up at work and am on vacation! My dual goals for this time off are to destress and catch up on my to-do list here at home.

Today I put plastic up over my bedroom windows to help keep the northwest winds out. This evening we went to see The Hobbit. I'm afraid that I'm one of those who found it boring. It didn't have that special feel like The Lord of the Rings and the pace was very slow. My son enjoyed it though.
Posted by tpals at 11:55 PM 1 comment:

First blizzard of the winter

Sunday was our first blizzard of the winter. As blizzards go, this one was mild; about 10 inches of snow combined with strong winds caused road closures and advice not to travel, yet by Monday the winds had died down. I shoveled the driveway today and it wasn't bad with no wind and moderate temps.

So, it feels as if we're being eased into the winter season. Personally, I'd love to see a pattern of heavy snow followed by a melt down. We desperately need the moisture and as long as we can avoid ice it wouldn't be too hard to deal with.

There's something especially cozy about being home by the fire when you know you can't go anywhere but feeling safe anyway. If there had been an ice storm and the power lines were in danger I would have felt it necessary to try to clear some of the snow off the solar panels. As it was, I reread The Long Winter and marveled at what they survived. Imagine not being able to leave your home town for over five months, no school for an entire winter, heat only during the day, no lighting, no insulation and being on the edge of starvation. It really would feel like the weather was some malevolent force trying to destroy you.

Our abnormally warm and dry winter has finally taken a turn towards normal. These were the scenes that waited outside my back door this morning. 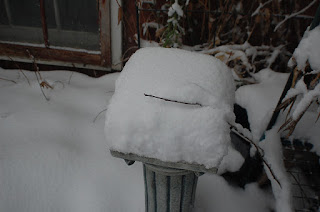 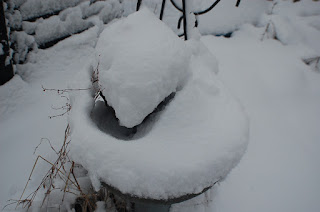 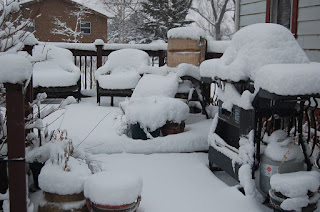 The moisture is desperately needed, but it is a bit worrying because the wind is supposed to blow hard today. A good day to stay inside...at least that is what my chickens tell me. They aren't leaving the coop.