I'm in a complaining mood and the fact that it's a day off work makes that even more unpleasant. Something I've noticed is that menopausal hot flashes come in waves; not that big of a deal in the winter, but definitely an issue in the summertime.

Today is in the 80s. Lots of sunshine, should be a fine day. Instead, I'm stuck sitting in front of a fan and still on the edge of being uncomfortable. Going outside feels like walking into an oven.

Added to that is my taking a tumble yesterday and wrenching both knees. Not debilitating, but sore enough to make movement cautious.

All of that means the to-do list for today is almost entirely untouched. I did dig out the live trap to set up and hopefully catch the possum hanging around. And I made a loaf of bread. That's all for the entire day! (Susan would be so ashamed of me.)

Back to work tomorrow. Sigh.
Posted by tpals at 5:39 PM 4 comments:

Susan hummed softly as she unlocked the apartment door. It had turned out to be a good day; Iris had cheered up and remembered happier times from her childhood. They also spent part of the morning choosing more recipes for Susan to work into the menu and supper had been a success. All of which put her in an upbeat mood for the evening.

Inside, she found Dave writing at the table. "Hello, Dave. How was work today?"

He looked up with an easy smile, "Nice. I got two of my chicks to sit on my shoulder while I did chores. And there's a big bag of lettuce and spinach in the fridge." Looking back down at the paper, he continued, "I'm trying to tell Mom all the news from church without the gossip."

"All right, I guess. Grandma's house is in a quiet neighborhood, but Mom is worried the riots might reach them."

Susan nodded thoughtfully; it was certainly an understandable worry. Now that she heard more of the daily news with Iris and Grace, she also was more concerned with the increase in riots. They didn't seem limited to any particular location or cause either. The violence in Europe seemed to revolve around brutally high unemployment and austerity cuts while Canada dealt with a severe drought and heatwave with resulting power brownouts and forest fires. In the U.S., each city affected blamed something different for the unrest, from unpopular criminal trials to political scandals. Susan was convinced the true reasons were almost always economic.

Dave's forehead twisted with his thoughts, "It's ironic that Dad applied to work at the plant that got shut down, which made the union start the protests, which led to the riots, and now they're even worse off. I wish they were still here."

"They haven't mentioned moving back?"

"No. They've turned the entire backyard into a garden and Grandma couldn't take care of it alone. Plus, Mom likes her new church. If Dad could find some work, they'd be happy there." A wistful look crossed his face, "I thought about going back now that my cousins have gone to Florida, but I feel useful here and I wonder if they'll stay gone."

"If Florida doesn't turn out to be the easy living they expect, will they show up in Wichita expecting Grandma to take them in again?"

"Ah, yes, that's certainly possible. And the job market isn't any better in Florida. Well, you're welcome to stay with us as long as you want. You've made yourself an asset." She smiled fondly at the young man who had become a second son to her during the last twelve years of his and Danny's friendship.

"Oh! I almost forgot; I'll be late tomorrow. I promised to help make strawberry jam. I think all the gardeners I help have conspired to teach me every different way they know to preserve produce."

Susan firmly squelched her flash of envy at the variety of jobs he got to do and reminded herself how lucky she was to have work of any kind. "I hope you'll take notes on the processes. I've never made jam."

Dave nodded and bent back to his letter.

I went to the basement to get a spare garden hose today. As I pulled it out of the corner, I spotted movement...a baby garter snake. Awww, so cute. It wasn't moving quickly, probably due to the cool temperature down there, so I was able to pick it up easily. It curled up around my hand as I carried it up and released it under the deck. I suspect it may be a very lucky snake to have ended up in my house, since both my neighbors tend to overreact to our scaled friends.

One of the hens wouldn't leave the chick pen when I was letting them out this morning. Was she annoyed when she was stuck in there all day! Speaking of chickens: my last hatching for this year is finishing up. 29 new babies for my friends. I hope they get a nice rooster this time. Their last one turned mean and aggressive until they chose to remove the problem. The strange thing is his father is quite meek and never aggressive.

Looking at my pink arms, I realize I need to put on sunscreen for work. Sometimes the obvious doesn't occur to me until after it would do some good.

Because I like to bring in fresh blood lines into my flock regularly, I ordered a mix of chicks this year. 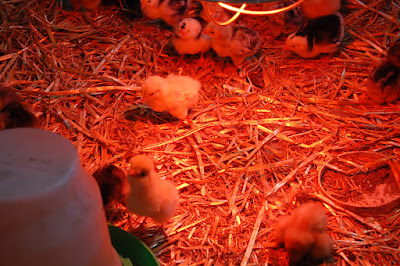 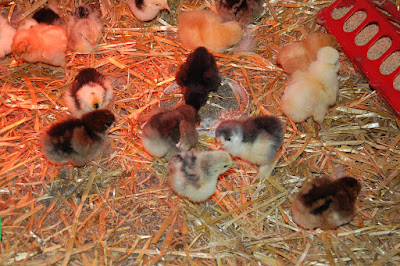 They start off all cute and fluffy. Then... 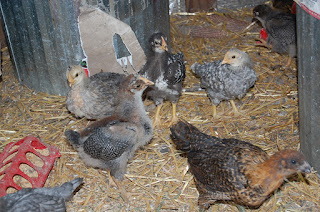 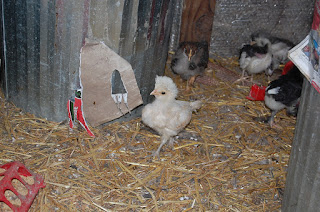 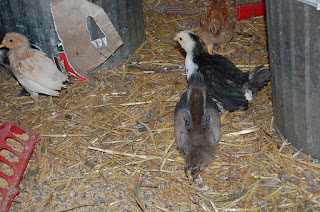 Suddenly, five weeks later, they are pre-teens with attitude.
Posted by tpals at 9:18 AM 1 comment:

It was a long winter, but it's definitely over now.

I've taken a part-time job at a local garden center. It gets me out of the house and interacting with people. The traumatic part is transitioning from 20 years at a desk to 8 hours on my feet...ouch!

Wednesday was my first day off when it wasn't too wet to mow. Of course, nothing goes smoothly and it took a big chunk of the day getting the mower started. By then it was a bit like cutting hay, but the chickens enjoyed getting clumps of grass to scratch around in.

Haha - I just realized I haven't even put my winter coat away.
Posted by tpals at 8:30 PM 2 comments:

Danny was waiting in front of the apartment building when Melody pulled up. On this rare occasion of them both having the day off, they were driving out to a state park to picnic, swim and hike. He felt a bit strange bringing peanut butter sandwiches on a date, but she had insisted it was what she wanted.

Instead of waiting for him to get in, Melody climbed out of the car and joined him. "Hi, can I say hello to your mom before we go?"

Once inside the apartment, Iris insisted they stay for cookies as she always did. Danny limited himself to one cookie; his mom had explained to him the importance of accepting hospitality but not taking advantage. "Did you ever picnic at the lake?" he asked their hostess.

"Once I remember, the church took us out on a bus. We each got an orange! I had never had one before and had to be shown how to peel it." Her face fell, "I was embarrassed because I had to wear a dress made from a flour sack and the children with proper clothes teased us. And my feet hurt because the shoes were my sister's and didn't fit right." Her expression became mulish, "I don't want to talk about that anymore."

When Susan nodded them towards the door, the kids politely said their thank yous and left. In the car, Melody sighed, "It's sad that she doesn't have happier memories of her childhood."

"I hope things don't get that bad ever again." A gas station sign caught his eye. "Do you think the president releasing the oil reserves will help?"

"My dad doesn't. He says it's one of those gestures politicians make for show. It's supposed to help the trucking and tourism industries, but the truckers have already been slammed by the retail depression and cheaper diesel is too little, too late. As for tourism, well, how many people can still afford to travel, even with lower gas prices?"

Danny nodded thoughtfully, "Plus, this is going to hurt everyone working in the oil industry, so that's even more possibly needing help."

When they pulled into the state park, they noticed a sign on the door where the park attendants worked. Danny hopped out to read it. Slowly getting back into the car, he looked puzzled. "The offices and all park facilities are shut down. No camping, electricity, water, sewage dumping or maintenance. Any park usage is 'at risk', whatever that means."

Melody chewed on her lip while thinking this through, "I guess don't expect to be rescued if we get in trouble. I wouldn't want to be here at night if they aren't keeping an eye out for parties. It might say 'no camping' but without enforcement, people will be here anyway and it's going to get trashed."

"What do you want to do today? Are you comfortable swimming?"

She flashed a grin at him, "I'm certified as a lifeguard. I'll have your back."

"You are? Why are you working at a pizza joint?"

"Ugh, being a lifeguard is the most mind-numbingly boring job imaginable. It's like being a babysitter to a mob of kids let loose and I'm not going to tell you about all the peeing."

Nose wrinkling at that thought, Danny laughed, "Okay, lets see if we can find some kid-free swimming."

The first beach they drove past had a few families splashing around, but they could see the toilets were padlocked shut. Exchanging glances, they both shook their heads. About half a mile further on they found a small, pebbly beach with no facilities or people and, putting the park shut down out of their heads, they enjoyed a morning of peaceful swimming.

Eating their sandwiches while leaning on the hood of the car, the warm breeze quickly dried them off. While discussing the hike they had originally planned, they both became aware of a low, rumbling noise growing closer. "Those are motorcycles," Melody identified with a frown. "I'd rather not find out if they're friendly out here alone. Do you mind?"

"Let's go!" Danny agreed with a sharp nod. As they drove to the park exit, he felt sorry for not giving the bikers the benefit of the doubt. His own grandfather used to ride out to Sturgis every year, but things felt too unsettled to take the chance now and he had no illusions about being able to protect themselves against potential trouble.

On the drive home, the brief adrenaline rush faded and they returned to discussing what they had discovered that morning. "Will your parents be able to find out what was behind the park closing?"

"I think so. Mom will be upset she hadn't heard anything before we left, so either it's just happened or someone has kept it secret somehow. And that isn't easy when it's a public use area. I'll let you know what I find out at work tomorrow."

Danny started to ask what she wanted to do with the rest of the afternoon when his cell phone buzzed. "I have to fill in at work. I guess it's good we're heading back early."

"I'll drop you at home so you can change. Even if it didn't go quite as planned, I still had fun."

He smiled with relief at her understanding. "Me too."