Just a week after my son renewed his xbox live subscription he got the 3 rings of death on his console...which is out of warranty...and would take 2 or 3 weeks to get repaired...and cost $100.
Posted by tpals at 11:22 PM No comments:

All that moaning and I forgot to mention the good. I got a call from my favorite Glaswegian today. Although it's been months since we last chatted, you'd never guess it. Some friendships stay strong no matter how much time passes. You can see from this picture that when we last saw him my son was shorter...not now! 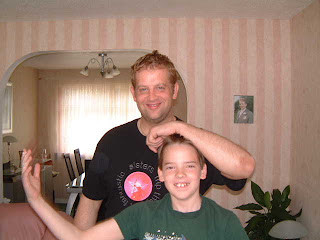 Someday he will reach his dream goal and move to Australia. Hopefully, not too soon. I'd like to visit Scotland again, but Australia...not so much.
Posted by tpals at 5:56 PM No comments:

Farms, future and past 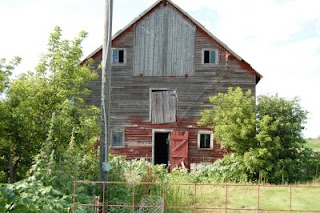 The wind has switched around to the north and picked up speed. Leaves swirl around me like my own private whirlwind. It's been a weekend of recognizing that autumn is well and truly upon us; pulling out the air conditioners, closing up the polytunnel, bringing the onions inside.
There have been frustrations. Worst was learning that my parents refuse to even consider saving the barn. Their viewpoint is that they have no use for it (even though it houses the hens and turkeys!) so what does it matter if it collapses. My mother wants to burn it down! The most damning statement was 'if it was ten years ago maybe'. Ha! And just who was living there ten years, twenty years, even thirty years ago and never lifted a finger? Such bloody-minded complacency just staggers me. When I considered their track record I'm not so surprised. When we moved to the farm there were four sheds, a garage, and an outhouse that are all gone now. Soon, all that will be left is the farmhouse. Nobody who wants to buy a farm will look at a place with a house on a hill and no out-buildings. When the time comes it will be bought for the land and everything else will be bulldozed; the apple trees, lilacs, raspberry bushes, even the pines that have stood well over a century.
So why does this matter so much? The logical side is that, while it may not be cheaper, renovating the barn is the green choice. Emotionally, this is the heart of my childhood. I was never one of those girls who loved to be in the kitchen or playing with baby dolls. I was outside exploring, playing, getting bit, scraped and bruised. My roots aren't anchored in the house where I grew up, they're in the farm. My closest sister and I would swing open the door to the hayloft (the one that's lost the bottom hinge) and play with the kittens hidden in the straw bales. One year I shovelled out the entire barn, massive piles of manure. The paint that is left stops at that height because it's as high as I could reach.
The future I would wish for the farm? To be home to a young family of green weirdies, raising organic vegetables, a friendly sow called Cuddles with 13 piglets, a sweet-natured milk cow, a few daft sheep and lots of birds. It's a wonderful way to spend a childhood.
Posted by tpals at 4:17 PM 2 comments:

There is something enormously satisfying about having a full pantry. It's been a fairly recent exercise for me to stock up and I'm sure to make some mistakes along the way.

My parents have a membership at Sam's Club and took me along last week. It was interesting to learn that buying in bulk quantities kept the price down by around 25% compared to the grocery store. I kept my purchases limited to items I know will be used and were practical--no huge boxes of snack foods. A 3 liter bottle of extra virgin olive oil, 2 gallons of vinegar, large bag of baking soda (that covers a lot of cleaning), large bag of walnuts (which will be frozen) are some of the items I got.

This weekend I bought a gallon of local honey. A gallon seems like a very large amount to me, but this is the only food that never goes bad. I wish I had bees, but for now all I can do is plant lots of flowers for them.

So, why the deep pantry? Although it's a terrific way to be frugal and prepare for financial hardship that isn't what motivates me. I worry that we (everywhere) are balanced very precariously in so many ways (economically, population, environment, resources...) that anything could throw us off. I was talking to one of my co-workers recently about having water for emergencies and his response was that if anything happened to the water supply he'd go buy some....is this just the difference between people who come from farms versus city folk??? As if in that situation all the hundreds of thousands of other people in the city wouldn't be trying to do the same thing?

I follow the government recommendation for water: rinse containers with a mild bleach solution and fill with water. Refresh the supply every six months. I'm still working on building up a stockpile as gallon containers become available.

If wishes were tickets

Do you ever play the 'what if' game of winning the lottery? Someone posted about that recently and it made me think what if I did. Actually, I rarely buy a ticket; I get bored quickly when I don't win anything and don't think about it for six months or more. When I do, I'll calculate what the winnings would be after taxes (govt would take around 40%) and imagine what I'd do with that amount.

I don't play for the big ones, I can't even imagine having 80+ million and wouldn't know how to adjust to that. $100,000 seems like the perfect amount. That would pay all my debt, including the mortgage and leave enough for my son's college education easily. Even the $60,000 that would be left after taxes would allow me to cash-flow the tuition. Ahh, dreams.

Right now the lottery is built up to the point that the payout would be $570,000. This is where the imagination gets to run a bit wild. Solar panels for anyone in the family interested. College funds for my sister's kids. The barn roof!!! In fact, I'd have the whole thing fixed up properly. A privacy fence around my back yard so the dogs aren't driven mad by all the unrestrained dogs in town and the neighbors couldn't ride their four-wheelers and snowmobiles across. Have the well pump on the farm repaired. Maybe even a wind turbine for the farm; it would be the first in the county!
Posted by tpals at 11:44 PM 2 comments:

Normally when I'm feeling hard done by and overwhelmed by the bad I would turn to comfort foods. Not today. This time I've been working my ass off for the last two weeks to lose six pounds and there's no way I'm going to sabotage that.
Posted by tpals at 4:10 PM 1 comment:

It's been surprisingly warm with more sunny days forecast. Having to water the garden this late in the season feels odd, but we haven't had rain recently.

I hope the weather holds out long enough to allow these black bell peppers to grow to maturity. 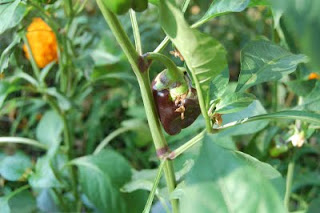 This dry, shapeless mass is actually my cilantro which I've been collecting seeds from for next years planting. 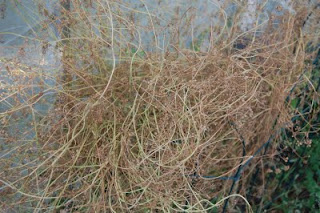 Something that keeps going beautifully, parsley. 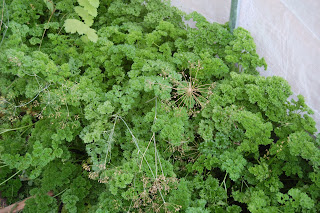 The winter squash is developing nicely. Lots of these beauties out there growing away. 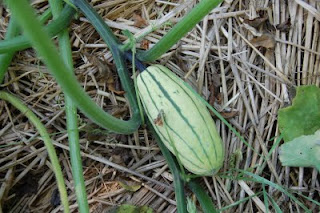 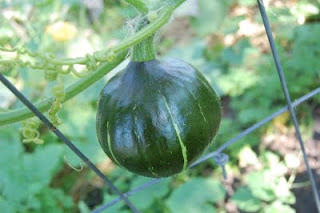 I love the contrasting colors between the marigolds and red cabbages. 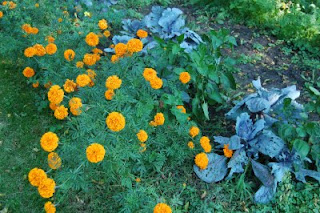 Nothe the standard idea of a flower garden, but I put so much energy into the vegetables that I neglect the flowers. Since I watched an older Alan Titshmarch show, How to be a Gardener, I feel motivated to make it up to my poor flowers. I've been composting around the perenials so they'll get the boost in the spring when I'm obsessing with the seedlings.
Posted by tpals at 9:33 PM 1 comment:

A beautiful day for a holiday weekend; sunshine, light breeze and very relaxing. My clothesline is full of laundry soaking up that sunshine and fresh scent, but the feeling of accomplishment today came from getting up and exercising first thing this morning.

I dug up the turnips and rutabagas. So much for seeing how well they keep into the winter - every one had been chewed up. The winter squashes are developing well. I'll try to take some pictures tomorrow.

Now, we're off to see GI Joe at the local cheap theatre.
Posted by tpals at 5:20 PM 1 comment:

I've decided to lose weight/exercise (and it's not even New Year!). My goal is to lose 2 stone by the end of the year and exercise 5 days each week. I would like to lose a lot more but it will be easier if I can set smaller goals.

I normally take my lunch to work so the problems start when I get home in the evening. I'm tired, hungry and even with the best intentions will grab whatever is available. I'll then sit down and won't have the drive to get back up to cook something nutritious. Which means I'm going to have to be very careful not to buy any of those easy foods. Today, as my first serious day, I cut up some tomatoes (from mom's garden) to munch while the roast chicken breast is in the oven. Except...those have been eaten, the chicken will take another 30 minutes and I'm hungry! Grumble.
Posted by tpals at 6:22 PM 1 comment:

There's a decided nip in the air every morning. The horse chestnut tree has been dropping leaves for a couple weeks already, but that doesn't really count because it does that every late summer.

Things have eased up a bit in the garden now that the onions, garlic and potatoes are dug. If my tomatoes had produced I'd be keeping busy there, but black walnut trees put a stop to that early in the summer. Next year I'll have to put them back in the polytunnel. My late lettuce and spinach are still growing, but it's bitter and slow so the guinea pigs get all that. The one thing I have masses of still is parsley! It loves growing in the polytunnel.
Posted by tpals at 11:04 PM 3 comments:
Newer Posts Older Posts Home
Subscribe to: Posts (Atom)