I have a chart similar to this that I keep on my desk to track my debt payoff. Some months I can only fill in a thin line, others a bunch of lines but it's been a good reminder of the progress I've made. So, I tried to find one for my weight but couldn't. This is my homemade version which will reside on the front of the refrigerator until it's full. It's marked in half stones up to five which is 70 pounds. My plan is to fill in two of these, then evaluate how much further I want to go. Because of the amounts involved this will be a very long term project (another similarity to the debt payoff!). I've decided to be satisfied losing one pound a week on average...which is still 52 pounds a year! 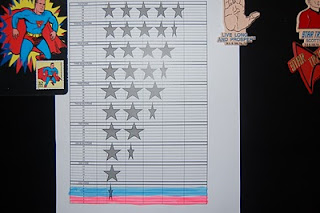 Sometime in the next 65 pounds I'd like to think of a nice reward to celebrate filling the sheet.
Posted by tpals at 3:08 PM

This is a great idea....this way you can always see that you are making rogress and keep on track!!