I bought five hens from a local breeder on Oct 19, 2009. They lived at the farm in the old barn at first. Later, when I had my chicken coop built, the two left were moved to my place. Because one had a raspy voice like a heavy smoker, I called them Georgie and Gracie.


Tonight I found Georgie dead in the chicken pen. Although just over four years old, neither lay anymore but I'm too attached to all of them to cull any. 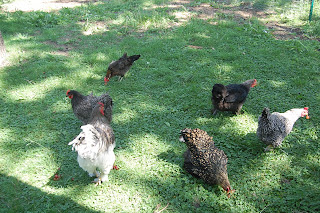 I know I can't keep all of this years chicks; some are clearly roosters already. It's just the hardest part for me.

I'd find that really hard too.

Always sad, bless a little life but a happy life and one which brought you so much pleasure. Hugs.

Sad to see a loved animal pass away. good luck deciding which chickens will stay and which will go!!